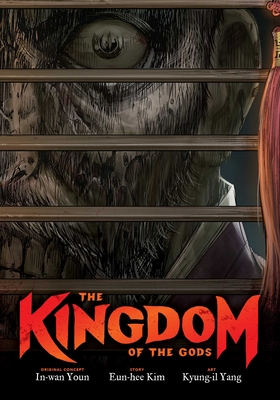 The Kingdom of the Gods

Years of war and famine and have plunged Joseon into chaos. The young Prince Yi Moon, having lost all his bodyguards to an assassination attempt, has no choice but to turn to the mountain bandit Jae-ha for help. But as the unlikely pair race to find safety in a world gone mad, it becomes horrifyingly clear that humans aren’t the only thing they must fear!

In a bonus story, a secluded island becomes a private battlefield as the notorious Japanese criminal Juu and the infamous Korean felon Han face off against each other. But they aren’t the only ones on the island…

Eun-hee Kim is a South Korean playwright and screenwriter. Her work includes Signal; one of the highest rated dramas in South Korean television history; and Kingdom; the critically acclaimed Netflix Original.

Kyung-Il Yang is a South Korean manhwa artist. His work includes Shin Angyo Onshi (Blade of the Phantom Master); Defense Devil and March Story; which is available in English from VIZ Media.
Loading...
or support indie stores by buying on