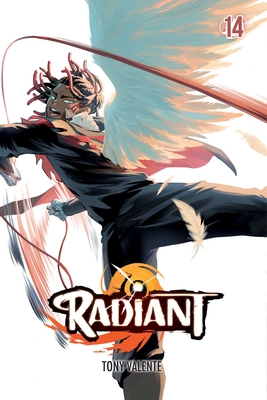 The world is overrun with monsters called Nemeses—and a young boy infected by one will stop at nothing to defeat them all!

Evil creatures called Nemeses fall from the skies and the only ones who can fight them are Wizards—infected ones who survived a Nemesis's corruption. Seth, one of these survivors, vows not only to fight the Nemeses, but to find their mythical nest, Radiant, and destroy it!

Relentlessly hunted by antagonists known as Domitors, Seth tries to fend off his pursuers and ends up discovering a new and surprising ability! Meanwhile, after being rescued by the alchemist Hurlä and the cheerfully oddball kids of the Droplet Gang, Seth’s friends Mélie and Ocoho set out to find him and their other missing friend, Doc, who has been taken in by the Inquisition after being mistaken for a kidnapped child. Unfortunately Doc’s lousy luck lets him down even more when he meets up with an old and not at all welcome acquaintance!

Tony Valente began working as a comic artist with the series The Four Princes of Ganahan, written by Raphael Drommelschlager. He then launched a new three-volume project, Hana Attori, after which he produced S.P.E.E.D. Angels, a series written by Didier Tarquin and colored by Pop.

In preparation for Radiant, he relocated to Canada. Through confronting caribou and grizzlies, he gained the wherewithal to train in obscure manga techniques. Since then, his eating habits have changed, his lifestyle became completely different and even his singing voice has changed a bit!
Loading...
or support indie stores by buying on