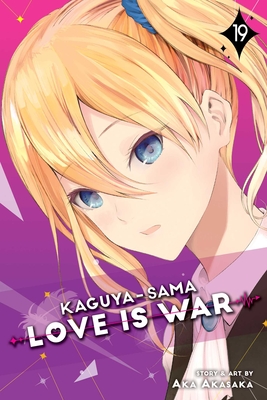 Will this romantic comedy turn into a thriller? Two warring factions in Kaguya’s family are trying to force her personal assistant, Ai, to abandon Kaguya and serve them. While Miyuki tries to save Ai from getting kidnapped, she sends an urgent message to Kaguya to meet her at the place where their relationship began—but Kaguya can’t figure out where that is! Meanwhile, as Yu and Tsubame grow closer, Miko grows more jealous, and student council factions clash over whom Yu should date!

You’re never too old to become a YouTube sensation.

Aka Akasaka got his start as an assistant to Jinsei Kataoka and Kazuma Kondou, the creators of Deadman Wonderland. His first serialized manga was an adaptation of the light novel series Sayonara Piano Sonata, published by Kadokawa in 2011. Kaguya-sama: Love Is War began serialization in Miracle Jump in 2015 but was later moved to Weekly Young Jump in 2016 due to its popularity.
Loading...
or support indie stores by buying on