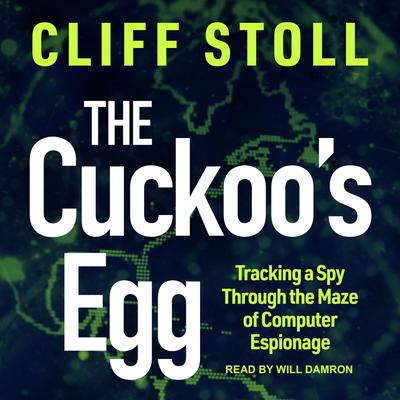 Tracking a Spy Through the Maze of Computer Espionage

By Cliff Stoll, Will Damron (Narrator)

Before the Internet became widely known as a global tool for terrorists, one perceptive US citizen recognized its ominous potential. Armed with clear evidence of computer espionage, he began a highly personal quest to expose a hidden network of spies that threatened national security. But would the authorities back him up? Cliff Stoll's dramatic firsthand account is "a computer-age detective story, instantly fascinating [and] astonishingly gripping"—Smithsonian.

Cliff Stoll was an astronomer turned systems manager at Lawrence Berkeley Lab when a seventy-five cent accounting error alerted him to the presence of an unauthorized user on his system. The hacker's code name was "Hunter"—a mysterious invader who managed to break into US computer systems and steal sensitive military and security information. Stoll began a one-man hunt of his own: spying on the spy. It was a dangerous game of deception, broken codes, satellites, and missile bases—a one-man sting operation that finally gained the attention of the CIA . . . and ultimately trapped an international spy ring fueled by cash, cocaine, and the KGB.

Will Damron is an Audie Award-nominated narrator who has recorded books in every genre, from science fiction and fantasy to romance, YA, and nonfiction. Raised in rural southern Virginia, he has appeared Off-Broadway and on stage and screen throughout the country. He lives in Los Angeles, California.