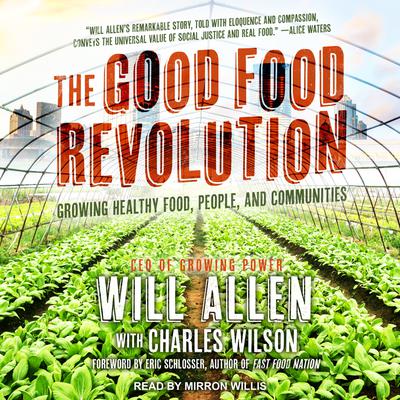 By Will Allen, Mirron Willis (Narrator)

A pioneering urban farmer and MacArthur "Genius Award" winner points the way to building a new food system that can feed—and heal—broken communities.

The son of a sharecropper, Will Allen had no intention of ever becoming a farmer himself. But after years in professional basketball and as an executive for Kentucky Fried Chicken and Procter & Gamble, Allen cashed in his retirement fund for a two-acre plot a half mile away from Milwaukee's largest public housing project. The area was a food desert with only convenience stores and fast-food restaurants to serve the needs of local residents.

An eco-classic in the making, The Good Food Revolution is the story of Will's personal journey, the lives he has touched, and a grassroots movement that is changing the way our nation eats.

Mirron Willis has narrated close to 150 audiobooks across various literary genres and has won several Earphone Awards for Excellence and is an Audie Award finalist and winner. Notable works include Ginny Gall by Charlie Smith, The Smokey Dalton Series by Kris Nelscott; My Song: A Memoir by Harry Belafonte; The Long Fall (Booklist, Best of 2009) and others by Walter Mosley; Uncle Tom's Cabin, Elijah of Buxton, The Translator; and Souls of Black Folk by W. E. B Dubois.

In three seasons at the Ensemble Theatre (Houston, Texas), Mirron appeared as JP in What I Learned in Paris, Malcolm X in The Meeting, Henry in Race, and as Countee Cullen in Knock Me a Kiss (2013 Giorgee Award for Best Leading Actor). Other roles include Twelfth Night, Much Ado About Nothing, Henry VI Parts 2 & 3, and A Raisin in the Sun with the world-renowned Oregon Shakespeare Festival. He has also performed as guest narrator with the Houston Symphony.
Film and TV guest appearances include Criminal Minds, Private Practice, The Exes, Monk, 24, Seinfeld, Cheers, The Parkers, Living Single, E.R., Star Trek, and Independence Day, among others. Mirron resides and records audiobooks on his family's historic ranch in East Texas.