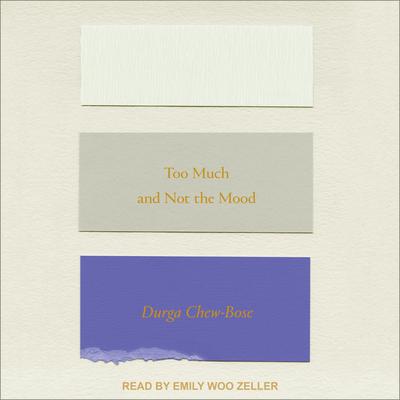 Too Much and Not the Mood (Digital Audiobook)

An entirely original portrait of a young writer shutting out the din in order to find her own voice.

On April 11, 1931, Virginia Woolf ended her entry in A Writer's Diary with the words "too much and not the mood." She was describing how tired she was of correcting her own writing, of the "cramming in and the cutting out" to please other readers, wondering if she had anything at all that was truly worth saying.

The character of that sentiment, the attitude of it, inspired Durga Chew-Bose to write and collect her own work. The result is a lyrical and piercingly insightful collection of essays and her own brand of essay-meets-prose poetry about identity and culture. Inspired by Maggie Nelson's Bluets, Lydia Davis's short prose, and Vivian Gornick's exploration of interior life, Chew-Bose captures the inner restlessness that keeps her always on the brink of creative expression.

Too Much and Not the Mood is a beautiful and surprising exploration of what it means to be a first-generation, creative young woman working today.