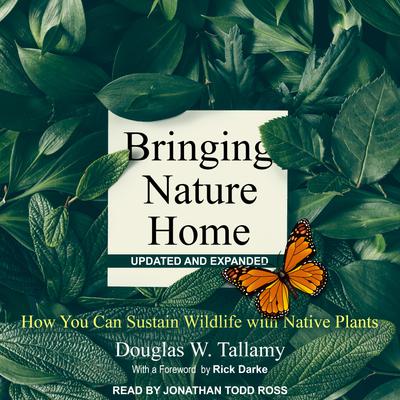 How You Can Sustain Wildlife with Native Plants, Updated and Expanded

As development and subsequent habitat destruction accelerate, there are increasing pressures on wildlife populations. But there is an important and simple step toward reversing this alarming trend: Everyone with access to a patch of earth can make a significant contribution toward sustaining biodiversity. There is an unbreakable link between native plant species and native wildlife—native insects cannot, or will not, eat alien plants. When native plants disappear, the insects disappear, impoverishing the food source for birds and other animals. In many parts of the world, habitat destruction has been so extensive that local wildlife is in crisis and may be headed toward extinction.

Bringing Nature Home has sparked a national conversation about the link between healthy local ecosystems and human well-being, and this audio edition will help broaden the movement. By acting on Douglas Tallamy's practical recommendations, everyone can make a difference.

Jonathan Todd Ross, a graduate of the NYU/Tisch School of the Arts, has narrated over 120 audiobooks across a wide variety of genres, including fiction, nonfiction, self-help, YA, biography and memoir, children's literature, and romance. He's won an Audie Award (Restart by Gordon Korman), received numerous YALSA and Earphone Awards (Swindle by Gordon Korman, Fake Mustache by Tom Angleberger, and more), and made all of his middle school bullies regret every mean thing they ever said to him when he narrated Tom Brady's The TB12 Method.