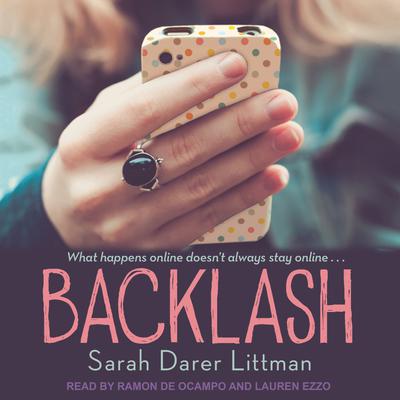 She thought that Christian liked her, that he was finally going to ask her to his school's homecoming dance. It's been a long time since Lara's felt this bad, this depressed. She's worked really hard since starting high school to be happy and make new friends.

Bree used to be BBFs with overweight, depressed Lara in middle school, but constantly listening to Lara's problems got to be too much. Bree's secretly glad that Christian's pointed out Lara's flaws to the world. Lara's not nearly as great as everyone thinks.

After weeks of talking online, Lara thought she knew Christian, so what's with this sudden change? And where does he get off saying horrible things on her wall? Even worse—are they true?

But no one realized just how far Christian's harsh comments would push Lara. Not even Bree. As online life collides with real life, the truth starts to come together and the backlash is even more devastating than than anyone could have imagined.

Lauren Ezzo is a Chicago-based audiobook narrator and commercial voice talent. A Michigan native and Hope College alumna, at this writing she has narrated over 100 titles for authors including Catherine Ryan Hyde, Georgia Clark, Adam Rapp, M. Dressler, Christopher Rice, Kirk Lynn, Lauren James, and Dot Hutchison. She has won multiple awards for her narration, including several "Best of the Year" lists, and several Earphones Awards. In 2016, her performance of The Light Fantastic, by Sarah Combs, conarrated with Todd Haberkorn, was named one of AudioFile's best books of the year. She was accorded the same honor in 2017 from School Library Journal for her narration of To Stay Alive: Mary Ann Graves and the Tragic Journey of the Donner Party. In 2018, she was Audie Award-nominated as part of a full cast of narrators for Best Original Work, Nevertheless We Persisted, performing two pieces-one of which she authored. She is a proud member of the Audio Publishers Association, and a lifelong bookworm.