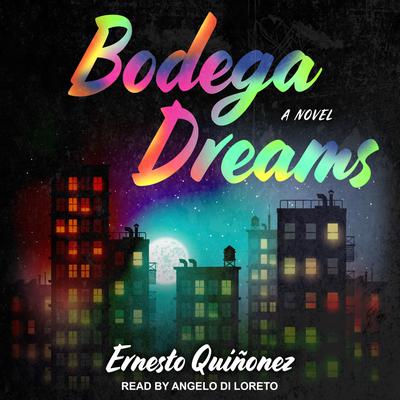 In a stunning narrative combining the gritty rhythms of Junot Diaz with the noir genius of Walter Mosley, Bodega Dreams pulls us into Spanish Harlem, where the word is out: Willie Bodega is king. Need college tuition for your daughter? Start-up funds for your fruit stand? Bodega can help. He gives everyone a leg up, in exchange only for loyalty—and a steady income from the drugs he pushes.

Lyrical, inspired, and darkly funny, this powerful debut novel brilliantly evokes the trial of Chino, a smart, promising young man to whom Bodega turns for a favor. Chino is drawn to Bodega's street-smart idealism, but soon finds himself over his head, navigating an underworld of switchblade tempers, turncoat morality, and murder.

Angelo Di Loreto is a versatile audiobook narrator and voice actor from Buffalo, New York, based in New York City. He has narrated titles for Audible Studios, Tantor Media, and an extensive body of self-produced work for ACX. As an actor, he has worked in various productions with the St. Joseph Academy Theater Company for the past few years and has studied and worked with voice-over and acting coaches such as Marla Kirban and Jayme Mattler. In addition to acting, Angelo is an accomplished pianist and composer, and regularly tours with his various projects.