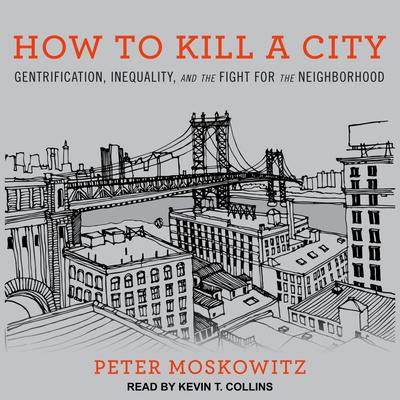 How to Kill a City (Digital Audiobook)

The term gentrification has become a buzzword to describe the changes in urban neighborhoods across the country, but we don't realize just how threatening it is. It means more than the arrival of trendy shops, much-maligned hipsters, and expensive lattes. The very future of American cities as vibrant, equitable spaces hangs in the balance.

Peter Moskowitz's How to Kill a City takes listeners from the kitchen tables of hurting families who can no longer afford their homes to the corporate boardrooms and political backrooms where destructive housing policies are devised. Along the way, Moskowitz uncovers the massive, systemic forces behind gentrification in New Orleans, Detroit, San Francisco, and New York. The deceptively simple question of who can and cannot afford to pay the rent goes to the heart of America's crises of race and inequality. In the fight for economic opportunity and racial justice, nothing could be more important than housing.

A vigorous, hard-hitting exposé, How to Kill a City reveals who holds power in our cities—and how we can get it back.

Kevin T. Collins is a New York actor and director who has been seen Off-Broadway in Made in Heaven and Angels; on TV in Vinyl, Law & Order, As the World Turns, One Life to Live, What Would You Do?, and Guiding Light; on film in Taking Woodstock, Detachment, The Family Fang, and Zombies Anonymous; and heard on over 225 audiobooks, including AudioFile Earphones Award winners Testimony and Lone Survivor, and the 2011 Audie Award-winning Beautiful Creatures.