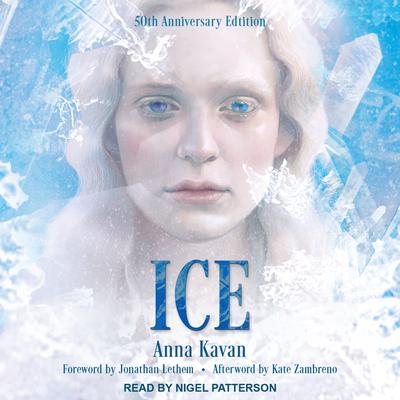 In a frozen, apocalyptic landscape, destruction abounds: great walls of ice overrun the world and secretive governments vie for control. Against this surreal, yet eerily familiar broken world, an unnamed narrator embarks on a hallucinatory quest for a strange and elusive "glass-girl" with silver hair. He crosses icy seas and frozen plains, searching ruined towns and ransacked rooms, all to free her from the grips of a tyrant known only as the warden and save her before the ice closes all around. A novel unlike any other, Ice is at once a dystopian adventure shattering the conventions of science fiction, a prescient warning of climate change and totalitarianism, a feminist exploration of violence and trauma, a Kafkaesque literary dreamscape, and a brilliant allegory for its author's struggles with addiction—all crystallized in prose glittering as the piling snow.

Kavan's 1967 novel has built a reputation as an extraordinary and innovative work of literature, garnering acclaim from China Miéville, Patti Smith, J. G. Ballard, Anaïs Nin, and Doris Lessing, among others. With echoes of dystopian classics like Ursula Le Guin's The Lathe of Heaven, Kurt Vonnegut's Cat's Cradle, and J. G. Ballard's High Rise, Ice is a necessary and unforgettable addition to the canon of science fiction classics.

British audiobook narrator and AudioFile Earphones Award winner Nigel Patterson has many credits as a stage, screen, and voice-over actor that influence his powerful characterization across a broad range of genres. AudioFile commented "his keen ear and impeccable diction give insights into the prevailing attitudes of the period . . . his wholly credible characters stay with you long after you unplug." A graduate linguist of the University of Oxford, he is fluent in French and Spanish, has lived and worked in the U.S. for fifteen years, and knows many different accents and dialects from around the world.