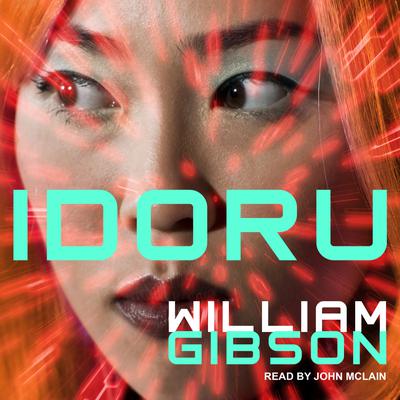 21st century Tokyo, after the millennial quake. Neon rain. Light everywhere blowing under any door you might try to close. Where the New Buildings, the largest in the world, erect themselves unaided, their slow rippling movements like the contractions of a sea-creature . . .

Colin Laney is here looking for work. He is an intuitive fisher for patterns of information, the "signature" an individual creates simply by going about the business of living. But Laney knows how to sift for the dangerous bits. Which makes him useful—to certain people.

Chia McKenzie is here on a rescue mission. She's fourteen. Her idol is the singer Rez, of the band Lo/Rez. When the Seattle chapter of the Lo/Rez fan club decided that he might be in trouble in Tokyo, they sent Chia to check it out.

Rei Toei is the idoru—the beautiful, entirely virtual media star adored by all Japan. Rez has declared that he will marry her. This is the rumor that has brought Chia to Tokyo. True or not, the idoru and the powerful interests surrounding her are enough to put all their lives in danger . . .

John McLain is an AudioFile Earphones Award-winning narrator who has recorded over 140 audiobook titles, from thrillers to nonfiction, westerns to mysteries, and more. John was nominated for an Audie Award in 2012 for his narration of the historical fiction novel The Resurrection of Nat Turner, Part 1: The Witnesses by Sharon Ewell Foster. An accomplished actor and musician, he has also appeared on the musical theater stage in Dallas and Phoenix.