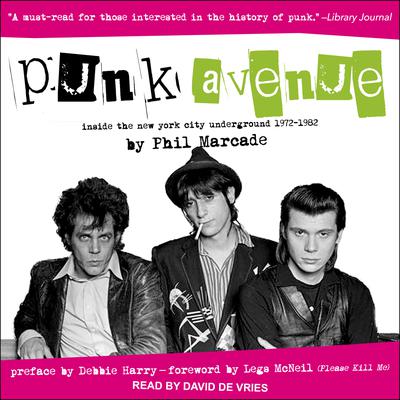 Punk Avenue is an intimate look at author Paris-born Phil Marcade's first ten years in the United States where he drifted from Boston to the West Coast and back, before winding up in New York City and becoming immersed in the early punk rock scene.

From backrooms of Max's and CBGB's to the Tropicana Hotel in Los Angeles and back, Punk Avenue is a tour de force of stories from someone at the heart of the era. With brilliant, often hilarious prose, Marcade relays first-hand tales about spending a Provincetown summer with photographer Nan Goldin and actor-writer Cookie Mueller, having the Ramones play their very first gig at his party, working with Blondie's Debbie Harry on French lyrics for her songs, enjoying Thanksgiving with Johnny Thunders' mother, and starting the beloved NYC punk-blues band The Senders.

David de Vries can be seen in a number of feature films, including The Founder, The Accountant, Captain America: Civil War, and Billy Lynn's Long Halftime Walk. On television, his credits include House of Cards, Nashville, Halt and Catch Fire, the National Geographic film Killing Reagan, and The Immortal Life of Henrietta Lacks for HBO. As a veteran stage actor, David appeared as Lumiere in Disney's Beauty and the Beast on Broadway, as Dr. Dillamond in the Los Angeles and Chicago companies of Wicked, and in hundreds of shows in regional theaters throughout the country. He is an Audie and Odyssey Award-winning narrator for his performance in Pam Munoz Ryan's Echo and has voiced over 100 titles in every genre, including his Audie Award-nominated performance of the 2011 Caldecott winner A Sick Day for Amos McGee.