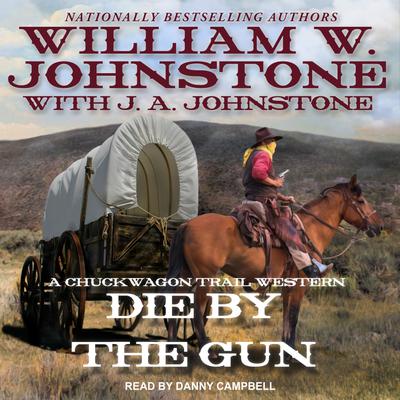 With one successful cattle drive under his belt, Dewey "Mac" McKenzie is on a first-name basis with danger. Marked for death for a crime he didn't commit and eager to get as far away from the territory, he signed on as cattle drive chuckwagon cook, to save his own skin—and learned how to serve up a tasty hot stew. Turns out Mac has a talent for fixing good vittles. He's also pretty handy with a gun. But Mac's enemies are hungry for more—and he's hired a gang of ruthless killers to turn up the heat . . .

Mac knows he's a dead man. His only hope is to join another cattle drive on the Goodnight-Loving Trail, deep in New Mexico Territory. The journey ahead is even deadlier than the hired guns behind him. His trail boss is an ornery cuss. His crew mate is the owner's spoiled son. And the route is overrun with kill-crazy rustlers and bloodthirsty Comanche. To make matters worse, Mac's would-be killers are closing in fast. But when the cattle owner's son is kidnapped, the courageous young cook has no choice but to jump out of the frying pan—and into the fire . . .

Danny Campbell's regional acting credits include the Actors Theatre of Louisville, the Utah Shakespearean Festival, the Vermont Stage, Stage West, the Mint Theatre in New York City, and six years with the Independent Shakespeare Company in Los Angeles. His favorite roles include Falstaff, Bottom, Launce, and the Porter. He has appeared in CBS's The Guardian, the recent films A Pool, a Fool, and a Duel and Greater Than Gravity, and over twenty-five commercials. He is also a member of the adjunct faculty in the theatre arts department at Santa Monica College. An AudioFile Earphones Award winner, Danny has recently narrated the audiobook Once a Spy by Keith Thomson, and he read the part of David Foster Wallace in Mike Lipsky's Although of Course You End Up Becoming Yourself.