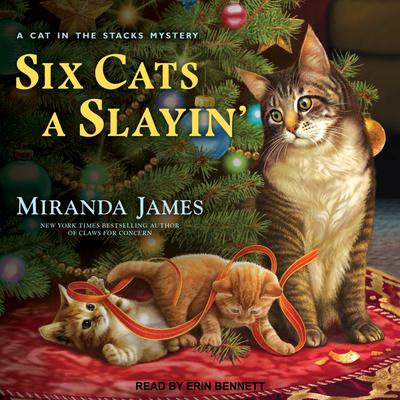 December twenty-fifth is right around the corner, and Charlie is making his list and checking it twice. He is doing his best to show some peace and goodwill toward his nosy neighbor Gerry Arbitron, a real estate agent who seems to have designs on his house (and maybe on him, as well), while preparing for a very important role, indeed—his first Christmas as a grandfather.

The last thing Charlie expects is to gain several new additions to his family. Charlie finds a box on his doorstep with five kittens inside and a note begging him to keep them safe. With Diesel's help, Charlie welcomes the tiny felines into the Harris household just as Gerry decides it is time to throw a lavish holiday party.

Determined to make her mark on Athena, Gerry instead winds up dead at her very own party. Though attempts to dig into her past come up empty, Charlie and his girlfriend, Helen Louise, witness two heated exchanges involving Gerry before her death: one with a leading citizen and another with the wife of a good friend. Will one of these ladies wind up on the sheriff's naughty list? Charlie and Diesel have to wrap up the case before the special season is ruined by a sinister scrooge.

Erin Bennett is an award-winning, Los Angeles-based voice actress whose passion for storytelling informs her love of narrating audiobooks. An AudioFile Earphones winner, she has recorded 130 titles for Penguin Random House, Hachette, Harper, Blackstone, Recorded Books, Tantor, Deyan, Dreamscape, and Audible, among others. Her genres vary widely, from literary fiction to mysteries to science fiction to memoir, as well as nonfiction, multicast recordings, and romance. Her recent on-camera work includes Grandfathered on FOX and Children's Hospital on Adult Swim, and her voice-over work spans animation, radio plays for the BBC, video games, and commercials for radio and television.