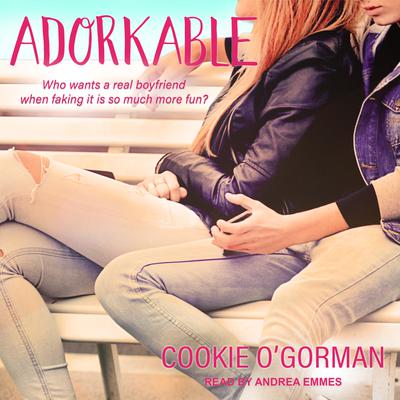 Seventeen-year-old Sally Spitz is done with dating. Or at least, she's done with the horrible blind dates/hookups/sneak attacks her matchmaking bestie, Hooker, sets her up on. There's only so much one geek girl and Gryffindor supporter can take.

Her solution: she needs a fake boyfriend. And fast.

Enter Becks, soccer phenom, all-around-hottie, and Sally's best friend practically since birth. When Sally asks Becks to be her F.B.F. (fake boyfriend), Becks is only too happy to be used. He'd do anything for Sal—even if that means giving her PDA lessons in his bedroom, saying she's "more than pretty," and expertly kissing her at parties.

The problem: Sally's been in love with Becks all her life—and he's completely clueless.

Audible bestselling narrator Andrea Emmes started her career in musical theater. Cutting her teeth at The Trinity Arts Center in Rhode Island, Andrea eventually made her way to Orlando and began her eclectic career singing/dancing in various shows at Walt Disney World, Universal Studios, and Pirates' Dinner Adventure; performing as a magician's assistant; headlining on the Las Vegas Strip; and touring Los Angeles as an L.A. Award-winning artist with her album, I'm On My Way.

Having worked in TV, film, and video games, Andrea, a total "book nerd," now enjoys narrating audiobooks at her home studio in San Jose, California. Her wide range of character voices and dynamic, emotionally invested performances have reviewers and listeners alike commenting on how she effortlessly pulls listeners in, and has versatility and charisma.