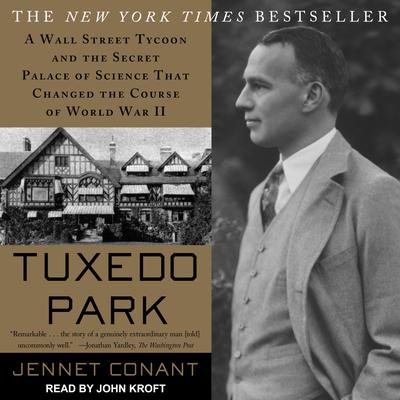 The untold story of an eccentric Wall Street tycoon and the circle of scientific geniuses he assembled before World War II to develop the science for radar and the atomic bomb. Together they changed the course of history.

Jennet Conant, the granddaughter of James Bryant Conant, one of the leading scientific advisers of World War II, enjoyed unprecedented access to Loomis' papers, as well as to people intimately involved in his life and work. She pierces through Loomis' obsessive secrecy and illuminates his role in assuring the Allied victory.

John Kroft is a New York-based actor and a recent graduate of the Juilliard School. He appeared Off-Broadway in Dan Cody's Yacht at Manhattan Theatre Club and has performed regionally at the Williamstown Theatre Festival, Eugene O'Neill's National Playwrights conference, the Bay Street Theater, and the Chautauqua Theater Company. His television credits include Red Oaks (Amazon) and Blue Bloods (CBS). As a narrator John has voiced several novels, including Restart (winner of Best Multi-Voiced Performance, 2018 Audie Awards), Sidetracked, Checked, Pride Wars Part I: The Spinner Prince, and The Possible World.