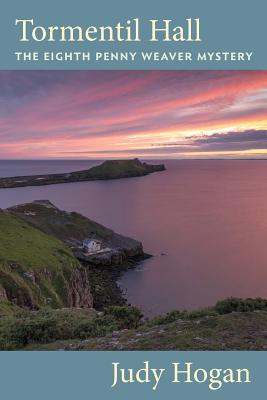 Poet Penny Weaver and her Welsh policeman husband Kenneth Morgan persuade their close friends Sammie and Derek Hargrave to accompany them to their beloved Gower peninsula in Wales, where they spend several months a year away from their home in Riverdell, a central North Carolina village. Even before they arrive at Kenneth's sister Gwyn's B&B in the village of Pwll du, Sammie panics at how her lively colors and exotic clothing is causing even the proper British to stare at her. There are few African Americans on Gower. The next day the visit turns into a real nightmare when an obnoxious woman guest dies after falling down the stairs. Derek, who was the only one awake in the house, is accused of pushing her and soon arrested. Kenneth normally works for the Swansea CID when he and Penny are in Wales, but his chief is on holiday, and xenophobic substitute Chief Investigator Williams wants to pin the death on the visiting African American cop. 164 words Despite Penny's efforts to cheer her up, Sammie feels alien, persecuted, and can't seem to take in the beauty, the fascinating history or anything good about Gower and its Welsh inhabitants. Racism and xenophobia on Gower is unnerving to her compared to racism at home where she is known and accustomed to coping with it. Penny and Sammie have always worked together secretly to solve Derek's cases at the Riverdell Sheriff's Department, but Penny can't persuade Sammie to help her once again uncover what actually set off the death. Sammie's desperation causes her to stay behind on the Worm's Head rock when the tide rolls in, and the footpath crossing is under water. She has to be rescued by the Royal Lifeboat Rescue people. Embarrassed by the trouble she caused by this incident, Sammie agrees to help Penny work on who might have pushed the victim down the stairs.

Judy Hogan was co-editor of a poetry journal (Hyperion, 1970-81). In 1976 she founded Carolina Wren Press. She has been active in central North Carolina as a reviewer, book distributor, publisher, teacher, and writing consultant. Her newest publications are Tormentil Hall, Political Peaches, and Grace: A China Diary, 1910-16, which she edited and annotated. Six other mystery novels, Killer Frost (2012), Farm Fresh and Fatal (2013) The Sands of Gower (2015), Haw, Nuclear Apples? and Formaldehyde, Rooster (2016) are in print. She has published six volumes of poetry with small presses, including, Beaver Soul (2013) and This River: An Epic Poem (2014). Her other published prose is Watering the Roots in a Democracy (1989) and The PMZ Poor Woman's Cookbook (2000). Her papers and 25 years of extensive diaries are in the Sallie Bingham Center for Women's History and Culture, Duke University. She has taught creative writing since 1974 and Freshman English 2004-2007 at St. Augustine's College in Raleigh. She also edits manuscripts for other creative writers. Judy lives and farms in Moncure, N.C., near Jordan Lake.
Loading...
or support indie stores by buying on