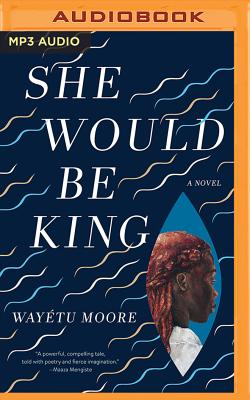 She Would Be King

“It’s hard to describe a novel as wholly original as She Would Be King. A retelling of the birth of Liberia through interconnected stories, the novel combines history, magic, and myth in one engrossing story. Moore’s novel takes you from West Africa to the plantations of Virginia, from Jamaica to Liberia, weaving together the stories of three characters who yearn for power and true freedom. Guided by the ancient wind, all of Moore’s characters challenge and transcend the many faces of oppression, and the story’s profound culmination will leave you in awe. She Would Be Kingis the kind of novel that lingers with you for days. A must-read!”
— Morgan McComb, Raven Book Store, Lawrence, KS
View the List

“She Would Be King is a rich and enchanting tale, a strikingly original and perfectly executed blend of historical fiction and magical realism. Through an utterly unique narrative perspective, Wayétu Moore presents us with a far-reaching and multifaceted story revolving around the Atlantic slave trade and the formation of Liberia. Yet another excellent, boundary-pushing, bar-raising debut from Graywolf Press.”
— Sean Fitzgerald, Village Lights Bookstore, Madison, IN
View the List

Way tu Moore's powerful debut novel, She Would Be King, reimagines the dramatic story of Liberia's early years through three unforgettable characters who share an uncommon bond. Gbessa, exiled from the West African village of Lai, is starved, bitten by a viper, and left for dead, but still she survives. June Dey, raised on a plantation in Virginia, hides his unusual strength until a confrontation with the overseer forces him to flee. Norman Aragon, the child of a white British colonizer and a Maroon slave from Jamaica, can fade from sight when the earth calls him. When the three meet in the settlement of Monrovia, their gifts help them salvage the tense relationship between the African American settlers and the indigenous tribes, as a new nation forms around them.

Moore's intermingling of history and magical realism finds voice not just in these three characters but also in the fleeting spirit of the wind, who embodies an ancient wisdom. "If she was not a woman," the wind says of Gbessa, "she would be king." In this vibrant story of the African diaspora, Moore, a talented storyteller and a daring writer, illuminates with radiant and exacting prose the tumultuous roots of a country inextricably bound to the United States. She Would Be King is a novel of profound depth set against a vast canvas and a transcendent debut from a major new author.