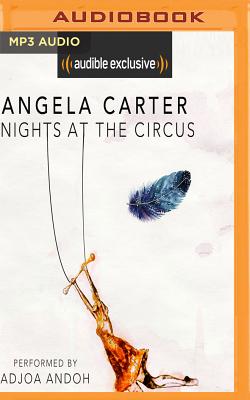 Nights at the Circus

This Audible Exclusive recording of Angela Carter's iconic novel, Nights at the Circus, is brought to you by celebrated actress and voice artist, Adjoa Andoh. It is described by Carter herself as a 'psychedelic Dickens.'

A compelling and thought provoking novel which heralds a new age, we're introduced to the unique and mesmerizing character of Sophi Fevvers and her illustrious wings....

Said to be part woman, part swan, Sophi Fevvers stars in Colonel Kearney's Circus, beloved and admired by audiences all around Europe.

Courted by the Prince of Wales himself and fawned on by American journalist, Jack Walser, Sophi defies expectation by embarking on a journey of self-discovery, and taking the listener on an intoxicating trip around London, St Petersburg and Siberia.

One of Carter's most empowered female protagonists, Fevvers heralds a 'new Age in which no women will be bound down to the ground, ' making this a timeless and wholly inspiring literary masterpiece.

Angela Carter was born in 1940, in Sussex. She grew up in the shabbily respectable south London district of Balham, the second child of an eccentric journalist father and a neurotic housewife mother.

She studied English at Bristol University before travelling extensively, teaching and writing numerous best-selling novels. They have all received considerable critical acclaim and remain firm favourites of modern English literature.

Angela was a devout feminist throughout her life, wrote for Spare Rib magazine and voted Labour. Her novels are wholly reflective of her world views and continue to inspire new generations of men and women worldwide.

She is well versed in the art of narration and has voiced over 100 audiobooks, including Naomi Alderman's The Power, Marcus Chown's The Ascent of Gravity, Alexander McCall Smith's The No. 1 Ladies' Detective Agency and Fiona Barton's The Child.

Adjoa has had many leading roles with the Royal Shakespeare Company, The National Theatre, The Royal Court Theatre and the Almeida Theatre, and she's acted in a production of Nights at the Circus.