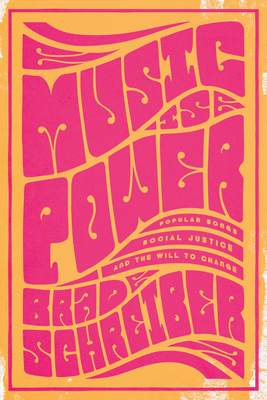 Popular Songs, Social Justice, and the Will to Change

Popular music has long been a powerful force for social change. Protest songs have served as anthems regarding war, racism, sexism, ecological destruction and so many other crucial issues.

Music Is Power takes us on a guided tour through the past 100 years of politically-conscious music, from Pete Seeger and Woody Guthrie to Green Day and NWA. Covering a wide variety of genres, including reggae, country, metal, psychedelia, rap, punk, folk and soul, Brad Schreiber demonstrates how musicians can take a variety of approaches— angry rallying cries, mournful elegies to the victims of injustice, or even humorous mockeries of authority—to fight for a fairer world. While shining a spotlight on Phil Ochs, Gil Scott-Heron, The Dead Kennedys and other seminal, politicized artists, he also gives readers a new appreciation of classic acts such as Lesley Gore, James Brown, and Black Sabbath, who overcame limitations in their industry to create politically potent music

Music Is Power tells fascinating stories about the origins and the impact of dozens of world-changing songs, while revealing political context and the personal challenges of legendary artists from Bob Dylan to Bob Marley.


Praise For Music is Power: Popular Songs, Social Justice, and the Will to Change…

“Brad Schreiber understands both music and politics, as well as the jagged lines where they overlap and intersect. His clarity, intelligence and insight provide lasting rewards.”

“An inspiring tour through the history of making change with music, and an important call for retrieving music’s intrinsic ability to challenge power.”

“A stirring survey of the sometimes sad, sometimes joyful, sometimes angry but ever hopeful music that is the soundtrack for America’s struggle to become a more fair and just society.”

"A fun read. It provides the old timer with a quick sail down the streams of memory and the younger reader with a useful and concise look at the music of the West that helped form the culture of today."
— CounterPunch

"Brad Schreiber talks about this topic perfectly...You did a lot of research."
https://www.youtube.com/watch?v=8Gaim6C8E3w&feature=youtu.be
— The Allan Handelman Show interview with Brad Schreiber: Music Is Power"

Brad Schreiber's Playlist for His Book "Music is Power: Popular Songs, Social Justice, and the Will to Change"
— Largehearted Boy

"A fun and informative read from first page to last."
— Midwest Book Review

"An intensively researched yet rollicking tour of socially charged music...A compelling read on the intersection of popular music and social activism, from Pete Seeger to Zappa to Public Enemy and beyond."
— American Songwriter

"What’s better than a book you didn’t know you needed? Music Is Power is a history of the nexus of music and protest, from Wobbly-turned-musician Joe Hill to Green Day, from folk to hip-hop."
— Razorcake

"Much has been written about these artists elsewhere, but Schreiber’s focus sets this study apart. He goes beneath the surface to detail how their social consciousness evolved during the course of their careers, and how they came to understand their music’s power to address social ills. This carefully researched book is suitable for fans and scholars alike. Recommended."
— Choice