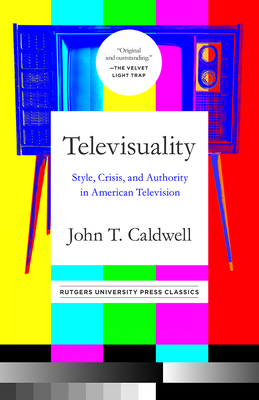 Although the "decline" of network television in the face of cable programming was an institutional crisis of television history, John Caldwell's classic volume Televisuality reveals that this decline spawned a flurry of new production initiatives to reassert network authority. Television in the 1980s hyped an extensive array of exhibitionist practices to raise the prime-time marquee above the multi-channel flow. Televisuality demonstrates the cultural logic of stylistic exhibitionism in everything from prestige series (Northern Exposure) and "loss-leader" event-status programming (War and Remembrance) to lower "trash" and "tabloid" forms (Pee-Wee's Playhouse and reality TV). Caldwell shows how "import-auteurs" like Oliver Stone and David Lynch were stylized for prime time as videographics packaged and tamed crisis news coverage. By drawing on production experience and critical and cultural analysis, and by tying technologies to aesthetics and ideology, Televisuality is a powerful call for desegregation of theory and practice in media scholarship and an end to the willful blindness of "high theory."

“This may be the most sophisticated study of the American television medium, industry, and aesthetic to date. Caldwell ranges through industry bumf and the academic bibliography to rescue the medium from theoretical simplifications. [An] insightful and allusive text that leaves virtually no familiar generalization unchallenged.”
— Choice, Outstanding Academic Title

“An original and outstanding contribution to television scholarship…. Illuminating both in its examination of television at a specific historical moment and in challenging common academic conceptions about the medium for their failure to engage with the historical changes in television production.
— Allan D. Campbell

“With its combined attention to television aesthetic, economic, and technological aspects, it [is] a highly innovative book that question[s] a great deal of conventional wisdom.”
— European Journal of Media Studies

“Engrossing and thought-provoking…. Televisuality points to a hole in television studies and highlights an interdisciplinary approach-combining the economic with the aesthetic and ideological-that could help to plug it.”
— Matthew P. McAllister

“Televisuality is a theoretical term coined by John Caldwell in the mid-1990s to characterize a change in the look and practice of television programming. This change began around 1980 and continues to the present day. Describing and discussing television through the lens of televisuality requires one to consider television as a mode of mass communication reliant on popularity with viewers and created in an industrial context whose labor relations affect how shows are produced. Overall, the main identifying feature of ‘the televisual’ is ‘an excess of style.’ Thus, programs produced from the 1980s onward are likely to break with traditional ‘invisible’ production styles and to innovate in ways that call the viewer's attention to the constructedness of the show—that it is a televisual text and that the viewer is watching (or, in a best-case scenario, participating) in the construction of meaning through attraction to or investment in the style of the televisual text.”
— Encyclopedia of Gender in Media Televisuality

John T. Caldwell is a Distinguished Research Professor of Cinema and Media Studies at the University of California–Los Angeles. He is the author of Production Culture: Industrial Reflexivity and Critical Practice in Film and Television (2008), and the director of Freak Street to Goa, Rancho California (por favor) , and Land Hacks , which have been featured in Amsterdam, Paris, and Berlin, and at the Margaret Mead and Sundance Film Festivals. He was awarded the “Outstanding Pedagogy Award” by the Society of Cinema and Media Studies in 2018.
Loading...
or
Not Currently Available for Direct Purchase