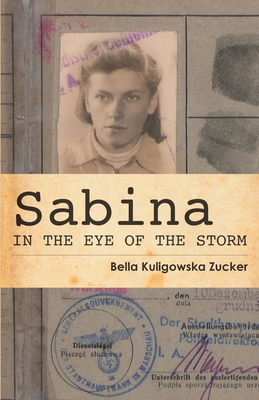 In the Eye of the Storm

As in Anne Frank's "Diary of a Young Girl" and Elie Wiesel's "Night", Bella Kuligowska bravely marshaled unexpected resources to manage as a teen during the horrors of World War II. "Sabina" offers a different perspective on how many Jews survived outside of the concentration camps, in more familiar yet infinitely hostile settings, with the help of others along the way. "I have gone by the name Sabina Mazurek," I tell the clerk at the Displaced Persons Center, "but I was born Bella Kuligowska. I am a Jew." In September 1939, Bella was a carefree teenager living in Serock, Poland when the German army struck. She was rounded up with her friends and family and sent to a series of grim Jewish ghettos. As loved ones were separated and lost through the war years, Bella survived by changing her identity. Narrowly escaping discovery and death time and again, she moved from place to place, odd job to odd job, new name to new name. After stealing the birth certificate of a Catholic girl five years her senior, she became Sabina Mazurek. Then she went into the eye of the storm, Germany, where she believed she might be safest. "Sabina" is her story.

Bella Kuligowska Zucker was born in Serock, Poland in 1925. She as a teenager when she was separated from her family and found herself completely alone during a time of great peril. After the war, she moved to Chicago, Illinois and spent her life dedicated to writing this memoir of her experiences during the Holocaust.
or support indie stores by buying on
Copyright © 2020 American Booksellers Association