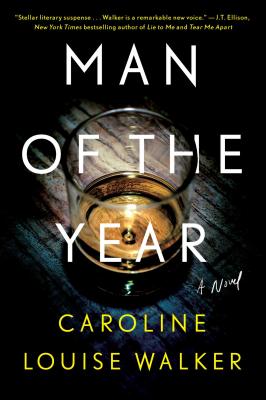 Praise For Man of the Year…

"This is THAT book. You know the one I'm talking about...the one hidden under your teetering should-read, have-to-read, said-I-would-read-months-ago pile. The one you grab at the end of the day because, damnit, you earned this deliciousness, and it reminds you of why you loved reading in the first place. Not only because it's a blisteringly intelligent, breathtaking debut, drenched with a masterful understanding of human nature, brimming with twists, surprises, suspense and razor sharp language, but because it's witty and hilarious and also - long lost thing - the book is a blast to read: it's fun. So go grab a copy and disappear yourself, I'll understand completely."


— Erica Ferencik, author of The River at Night

"Beautifully written and deviously plotted—the very best kind of story. Man of the Year is a stellar literary suspense, exploring the chasm between truth and lies, identity, love, hate, and the pursuit of self, and how a moment’s decision can undo a perfect world. Caroline Louise Walker is a remarkable new voice to watch. Give me more!"


— J.T. Ellison, New York Times bestselling author of LIE TO ME and TEAR ME APART

“Can you ever trust the cuckoo in the nest? Beautifully written, cleverly structured, and fiendishly plotted, this book should be at the top of every discerning reader’s list.”


— Liz Nugent, author of UNRAVELING OLIVER and LYING IN WAIT

"Othello isn’t the only great hero brought low by jealousy, as Caroline Louise Walker’s Man of the Year brilliantly proves. Just when you think you know which of the upstanding doctor’s suspicions to believe, the plot – and human nature – prove you wrong. This is what fiction is for."


— Lucy Ferriss, author of THE LOST DAUGHTER and A SISTER TO HONOR

“Man of The Year is horror that takes place in a familiar setting. Caroline Louise Walker writes with chilling realism about the darkness beneath normality, and her debut ends with a twist you won’t see coming.”


— Agnete Friis, New York Times bestselling coauthor of The Boy in the Suitcase

“Man of the Year cleverly exposes the fault lines in the seemingly idyllic life of a renowned doctor and his family when an outsider is invited in. Lies and misperceptions quickly spiral out of control, leading to deadly consequences. This dark family thriller will keep you on your toes until the very last page.”
— Wendy Walker, national bestselling author of THE NIGHT BEFORE

“A darkly beguiling summer mystery that exposes the shaky foundations of a complicated family.”
— Kirkus Reviews

“Searing . . . There are more than a few surprising twists in store in this smart, subtly menacing novel of suspense. Walker is a writer to watch.”
— Publishers Weekly

"Suspenseful and entertaining . . . The novel's thriller elements, set in the Gone Girl (2012) mold, lay bare the craven depths of depravity to which humans can sink as a cast of narrators, including three unreliable ones, spin and twist the plot between their manipulative fingers. The jolting roller-coaster ride serves double duty as a compelling case study in class and race privilege and the horrifying realities of purely self-serving, transactional relationships."
— Booklist

"This is a slow-burning character study with quite a payoff."
— Refinery29

"There is voyeuristic and considerable pleasure in watching the machinations of [Dr. Robert Hart's] demise."
— CrimeReads

"A superbly twisted story, Man of the Year is not to be missed."
— Women.com

"Man of the Year is an impressive slow burn that builds suspense and cracks the whip at the end . . . A debut redolent with menace and ego, Walker has expertly taken on the complex family dynamic."
— Shelf Awareness, starred review

"[U]nputdownable ...This book is crazy good, and the twists are totally unexpected."

"A sinister slow burn . . . Everything is not what it seems in idyllic Sag Harbor."
— Newsweek

Caroline Louise Walker grew up in Rock Island, Illinois. For her fiction and nonfiction, she has received fellowships from The MacDowell Colony, The Kerouac Project, and Jentel Arts. She holds an MA from NYU. Man of the Year is her first novel.
Loading...
or
Not Currently Available for Direct Purchase