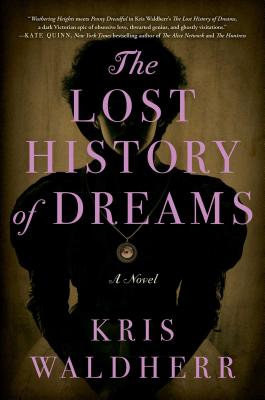 "The Lost History of Dreams refuses to be categorized as anything other than excellent. Within the framework of a gothic, Kris Waldherr confronts our ideas about love, grief, poetry, and the nature of storytelling. With skillfully nested stories, Waldherr has done the remarkable, rendering the ephemeral into something real and tangible. Brooding, romantic, and thoughtful, The Lost History of Dreams is a rare bird in that it shines throughout with wit. I loved every page of it."
—Erika Swyler, bestselling author of The Book of Speculation

"Reminiscent of du Maurier's My Cousin Rachel, The Lost History of Dreams is a complex, haunting and deeply absorbing historical novel that is sure to delight fans of classic Gothic fiction. With luminous prose, stunning poetry and a fascinating cast of characters, Waldherr weaves a wonderfully atmospheric tale. Not to be missed!"
—Hazel Gaynor, New York Times bestselling author of The Girl Who Came Home and The Lighthouse Keeper's Daughter

“In The Lost History of Dreams, Kris Waldherr delivers a novel of haunting mystery and passion reminiscent of Wuthering Heights and Byatt's Possession. Layered within the pages of this gorgeous gothic tale is a story of several loves, each masterfully wrought in dazzling, poetic detail that will leave the reader longing for more."
—Crystal King, author of Feast of Sorrow and The Chef's Secret

"In this accomplished debut, Kris Waldherr transports the reader to the fascinating world of Victorian England and its tradition of post-mortem photography with a deft hand. An atmospheric tale of lost love, family secrets, and an inquiry into how our own histories define us, I relished every poetic page. Mesmerizing, lyrical, and deliciously brooding, The Lost History of Dreams is a terrific contribution to Gothic literature."
—Heather Webb, international bestselling author of Last Christmas in Paris

"The Lost History of Dreams plunges the reader into a sumptuous feast for all the senses. Through the perspective of a very Victorian yet empathetic male protagonist, Waldherr cleverly depicts the confining roles women of the era were forced to play. This creepily delicious tale will rob readers of their sleep as it asks and answers its own question: "'How can there be so much beauty in this world amid so much sorrow?' The only solution was to create more beauty." With this novel, Waldherr has done exactly that."
—Clarissa Harwood, author of Impossible Saints and Bear No Malice

"Kris Waldherr's The Lost History of Dreams is very aptly titled, as reading this novel feels indeed like entering into a dream, one from which I have yet to fully awaken. With beautiful prose and poetry, Waldherr weaves a darkly seductive Gothic tale of love, art, death, and obsession. You'll want to keep reading this one late into the night."
—Alyssa Palombo, author of The Spellbook of Katrina Van Tassel

Kris Waldherr is an award-winning author, illustrator, and designer. She is a member of the Historical Novel Society, and her fiction has been awarded with fellowships by the Virginia Center of the Creative Arts and a reading grant by Poets & Writers. Kris Waldherr works and lives in Brooklyn in a Victorian-era house with her husband and their daughter.
Loading...
or
Not Currently Available for Direct Purchase