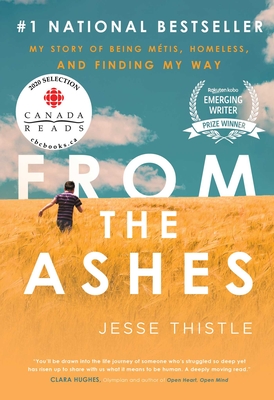 From the Ashes (Paperback)

My Story of Being Métis, Homeless, and Finding My Way

In this extraordinary and inspiring debut memoir, Jesse Thistle, once a high school dropout and now a rising Indigenous scholar, chronicles his life on the streets and how he overcame trauma and addiction to discover the truth about who he is.

From the Ashes is a remarkable memoir about hope and resilience, and a revelatory look into the life of a Métis-Cree man who refused to give up.

Abandoned by his parents as a toddler, Jesse Thistle briefly found himself in the foster-care system with his two brothers, cut off from all they had known. Eventually the children landed in the home of their paternal grandparents, whose tough-love attitudes quickly resulted in conflicts. Throughout it all, the ghost of Jesse’s drug-addicted father haunted the halls of the house and the memories of every family member. Struggling with all that had happened, Jesse succumbed to a self-destructive cycle of drug and alcohol addiction and petty crime, spending more than a decade on and off the streets, often homeless. Finally, he realized he would die unless he turned his life around.

In this heartwarming and heart-wrenching memoir, Jesse Thistle writes honestly and fearlessly about his painful past, the abuse he endured, and how he uncovered the truth about his parents. Through sheer perseverance and education—and newfound love—he found his way back into the circle of his Indigenous culture and family.

An eloquent exploration of the impact of prejudice and racism, From the Ashes is, in the end, about how love and support can help us find happiness despite the odds.

Jesse Thistle is Métis-Cree, from Prince Albert, Saskatchewan. He is an assistant professor in Métis Studies at York University in Toronto. He won a Governor General’s Academic Medal in 2016, and is a Pierre Elliot Trudeau Foundation Scholar and a Vanier Scholar. He lives in Toronto. Visit him on Twitter @MichifMan

Praise For From the Ashes: My Story of Being Métis, Homeless, and Finding My Way…

Praise for From the Ashes

“Blown away by [this] eloquent memoir of Métis life and surviving the streets . . . [a] strong contender for #CanadaReads.”
— EMMA DONOGHUE, New York Times bestselling author of Room (quote from Twitter)

“A memoir of resilience, spirit and dignity from a gifted storyteller. It is, at heart, also about the many shapes that love can inhabit. When you plan to read this book, clear your schedule. It will hold you in its grasp and won’t let you go, like a great novel. It’s all the more remarkable that this is not fiction. This book will stand out in my reading experience for a long time to come.”
— SHELAGH ROGERS, OC, host and a producer of CBC Radio's The Next Chapter, Honorary Witness, Truth and Reconciliation Commission of Canada

“So fortunate to have the opportunity to read From The Ashes. It launches in August and must be read by all. You’ll be drawn into the life journey of someone who’s struggled so deep yet has risen up to share with us what it means to be human. A deeply moving read.”
— CLARA HUGHES, Olympian and author of Open Heart, Open Mind

“This memoir haunts, gnawing at the soul as we walk with Jesse through his many incarnations. . . . If you want a glimpse at why some of our brothers and sisters end up on the streets, read this book.”
— TANYA TALAGA, The Walrus

“In spare and often brutal prose . . . Thistle weaves a narrative punctuated with joy and comedy and ultimately redemption.”
— Toronto Star

“From the Ashes is an illuminating, inside account of homelessness, a study of survival and freedom. Jesse Thistle delivers a painfully lyrical book, a journey through the torrents of addiction and trauma, masterfully sliding in humour and moments of heart-expanding human connection. I found myself gasping out loud at parts, unable to put the book down. Jesse’s story shows us that there is nothing that cannot be transformed.”
— AMANDA LINDHOUT, bestselling co-author of A House in the Sky

“A powerful and personal memoir.”
— RYAN MCMAHON, via Twitter

“A gritty memoir recounting the devastating long-term effects of childhood abandonment. . . . The theme of estrangement is powerfully portrayed in what is ultimately a story of courage and resilience certain to strike a chord with readers from many backgrounds.”
— Library Journal

“Candid and cutting, Jesse Thistle lays down his story with a brutal beauty you'll never forget. From the Ashes is a guided tour through a broken heart just trying to keep beating, both failing and succeeding spectacularly.”
— CHERIE DIMALINE, bestselling author of The Marrow Thieves

“Jesse’s story is shocking, intriguing, and compelling. He goes deep into the conflicting forces pulling him in different directions, the pain of knowing how he was letting down his grandmother, the terrifying sickness of addiction, and his own uncertainty about how to break the cycle. All the decks were stacked against him, yet he did learn to make the right choices. He had every right to blame ‘the system,’ but he never resorted to that easy strategy. His unexpected strength is remarkable.”
— CHARLOTTE GRAY, award-winning biographer and bestselling author of The Promise of Canada

“The best stories are the ones that stay with you. From the Ashes will stay with me for a long time. Maarsii to Jesse for coming through to tell this story. It is an important one. The revolutionary kind. The kind of story that changes how you look at the world, that shows us how amazing human beings can be, so capable, strong, resilient, powerful.”
— KATHERENA VERMETTE, bestselling author of The Break

“[This] powerful and moving memoir is also a scathing indictment of the treatment of Indigenous people and the myriad ways systems fail them.”
— Booklist

“This is a work that should not be mistaken for a redemption story—it is a love story. About family. Community. A partner. Most of all: this is a love story about Jesse Thistle. How he came to love himself. Why he is worthy of love. And, importantly, how you will love him when you are done reading. This book signals change: in our understanding of worth, our compassion in the face of harm and self-harm, and the power and possibility that can exist in spaces we try to forget about. Jesse Thistle is amazing. His story is stunning. We will talk about colonial and other violence differently on Turtle Island because Jesse lived them and shared them with us. With an openness, candour and generosity that is inspiring. Its uglybeautiful/hurtlove will resonate with you long after you finish turning the pages. I am proud to call him nisîmis (my little brother).”
— TRACEY LINDBERG, bestselling author of Birdie

“Stereotypes and conventional understandings are about to be challenged. . . . In the world Thistle inhabits, poverty, addiction, and homelessness are all one step over a line. Some are pushed, some stumble, and some jump. . . . The places Thistle takes us come together to illustrate a common theme: we look for home wherever we can find it. Over the course of the book, Thistle builds a better world for himself, one day and one decision at a time. It is a remarkable transformation to witness, and the arc of his story will make the reader want to cheer.” ­­
— Quill & Quire, starred review

“From the Ashes hits you like a punch in the gut. It’s an unflinching, heartrending, and beautifully written story of survival against seemingly impossible odds. But it’s also a book that should make you furious. Thistle paints a vivid portrait of a country seemingly incapable of doing right by Indigenous youth or by those struggling with homelessness, addiction, and intergenerational trauma. That he survived to tell this story is truly a miracle. Still, one question haunts me after finishing this powerful and devastating book: How do we ensure that the next generation isn’t forced to navigate a broken system that takes their lives for granted and fails them at every turn? My greatest hope, then, is that From the Ashes will be the wakeup call Canada needs.”
— IAN MOSBY, historian and author of Food Will Win the War
or
Buy Here
Copyright © 2020 American Booksellers Association