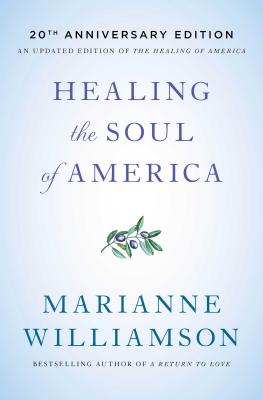 In the twentieth anniversary edition of Healing the Soul of America, Marianne Williamson reclaims her powerful voice for social conscience in American society. This is a time, according to Williamson, for Americans to return once again to our first principles, both politically and spiritually. Here, Williamson draws plans to transform the American political consciousness and encourage powerful citizen involvement to heal our society.

With updated material throughout, Williamson explores the current state of American politics, reminding us of her theory of holistic politics—the convergence of political activists looking toward spiritual wisdom and spiritual contemplatives extending their service into the political landscape. She believes that a morally concerned American must now take an active stand in turning this country away from its current identity as a nation obsessively in love with its money to a nation more seriously invested in all of its children and the potential brilliance of every citizen.

“Marianne Williamson…is attempting to…help not only her followers but an entire nation” (People). In the wake of the current political dysphoria, with countless tragedies consistently on the nightly news, America is facing a time of immense division. Political parties that completely polarize friends and family, mass shootings, threats of nuclear war, and a lack of confidence in our governmental leaders show that the country is in desperate need of restoration. We need a new paradigm of political understanding, a moral commitment to express it, and a new kind of activism to bring it forth. Healing the Soul of America is a blueprint for all three and there has never been a more urgent need.

Often called "the voice of her generation," Marianne Williamson has been lecturing on spirituality since 1983. She is the author of the New York Times bestsellers: A Return to Love; A Woman's Worth; Illuminata; The Healing of America; and Illuminated Prayers. Her books have been translated into more than twenty languages. Marianne continues to inspire audiences on a global scale as she lectures internationally in the fields of spirituality and new thought. Marianne is running in the 2020 presidential election as a Democratic candidate.
Loading...
or
Not Currently Available for Direct Purchase