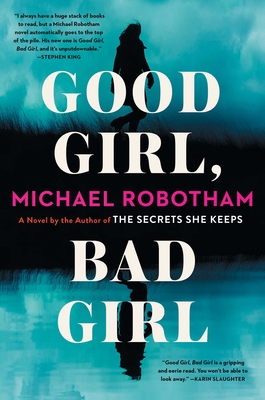 Finalist for the 2020 Edgar Award for Best Novel

“Good Girl, Bad Girl is a gripping and eerie read. You won’t be able to look away.” —Karin Slaughter, #1 international bestselling author

From the bestselling author of The Secrets She Keeps, the writer Stephen King calls “an absolute master…with heart and soul,” a fiendishly clever suspense novel about a dangerous young woman with a special ability to know when someone is lying—and the criminal psychologist who must outwit her to survive.

A girl is discovered hiding in a secret room in the aftermath of a terrible crime. Half-starved and filthy, she won’t tell anyone her name, or her age, or where she came from. Maybe she is twelve, maybe fifteen. She doesn’t appear in any missing persons file, and her DNA can’t be matched to an identity. Six years later, still unidentified, she is living in a secure children’s home with a new name, Evie Cormac. When she initiates a court case demanding the right to be released as an adult, forensic psychologist Cyrus Haven must determine if Evie is ready to go free. But she is unlike anyone he’s ever met—fascinating and dangerous in equal measure. Evie knows when someone is lying, and no one around her is telling the truth.

Meanwhile, Cyrus is called in to investigate the shocking murder of a high school figure-skating champion, Jodie Sheehan, who dies on a lonely footpath close to her home. Pretty and popular, Jodie is portrayed by everyone as the ultimate girl-next-door, but as Cyrus peels back the layers, a secret life emerges—one that Evie Cormac, the girl with no past, knows something about. A man haunted by his own tragic history, Cyrus is caught between the two cases—one girl who needs saving and another who needs justice. What price will he pay for the truth? Fiendishly clever, swiftly paced, and emotionally explosive, Good Girl, Bad Girl is the perfect thrilling summer read from internationally bestselling author Michael Robotham.

“Stellar…Robotham is a master plotter at the top of his form, and readers will surely hope to see more of his complicated new characters.” —Kirkus Reviews, STARRED Review

“Haunting…Robotham expertly raises the tension as the action hurtles toward the devastating climax. Readers will hope the complex Cyrus will return for an encore.” —Publishers Weekly, STARRED review

“Explosive...This sensitive, suspenseful mystery firmly establishes Robotham in the top ranks of psychological-thriller writers. And it cries out for a sequel.” —Booklist, STARRED review

“Robotham’s writing is achingly beautiful in Good Girl, Bad Girl. He shows the redemptive power of love and trust on broken people who don't know how to ask for help. He also digs deeply into how well-meaning adults can hijack the aspirations of adolescents, causing irreparable damage... An unlikely pair of broken people come together to solve the murder of a junior champion ice skater in this spellbinding thriller.” —Shelf Awareness, STARRED review

“Good Girl, Bad Girl is an impeccable thriller with a plot that encompasses murder, incest, drugs, abuse, torture, sex—you name it, this book has it.” —New York Journal of Books

Michael Robotham is a former investigative journalist whose bestselling psychological thrillers have been translated into twenty-five languages. He has twice won a Ned Kelly Award for Australia’s best crime novel, for Lost in 2005 and Shatter in 2008. His recent novels include When She Was Good, winner of the UK’s Ian Fleming Steel Dagger Award for best thriller; The Secrets She Keeps; Good Girl, Bad Girl; and When You Are Mine. After living and writing all over the world, Robotham settled his family in Sydney, Australia.
Loading...
or support indie stores by buying on