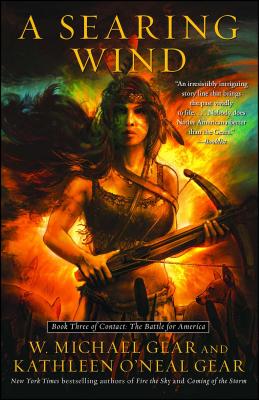 Set against the tragic war sparked by Hernando de Soto’s brutal invasion of the American South, A Searing Wind brings to an electrifying climax the intense historical action in the series hailed as “exciting, skillfully crafted, and fast-paced” (Publishers Weekly).

Once exiled by the Chicaza for cowardice in battle, Black Shell nevertheless dedicates his soul to stemming the onslaught of the Kristiano invaders and protecting his people. He and his beautiful wife, Pearl Hand, have fought the enemy from the Florida peninsula through the very heart of native America. They have seen the shackled slaves, heard the broken promises—and they have learned of de Soto’s plans to target the Chicaza. Obsessed with setting the perfect trap, Black Shell gambles everything to preserve his people’s fragile existence— their pride, traditions, even their winter stockpiles of food and supplies. But the stakes are raised to their greatest heights when he and Pearl Hand must walk boldly into de Soto’s camp and engage the cunning monster in a desperate game of wits in order to decide the fate of a continent.

W. Michael Gear and Kathleen O’Neal Gear are the New York Times bestselling authors of Coming of the Storm, Fire the Sky, and A Searing Wind in the Contact: Battle for America series, as well as more than fifty international bestsellers. In addition to writing both fiction and nonfiction together and separately, the Gears operate an anthropological research company, Wind River Archaeological Consultants, and raise buffalo on their ranch in northern Wyoming. Visit their informative website and read their blog at Gear-Gear.com.
or support indie stores by buying on
(This book is on backorder)
Copyright © 2020 American Booksellers Association