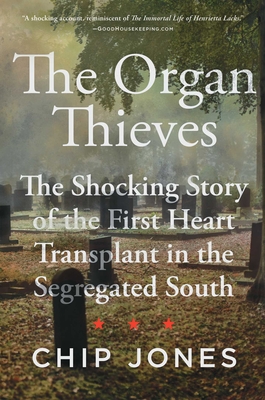 The Immortal Life of Henrietta Lacks meets Get Out in this “startling…powerful” (Kirkus Reviews) investigation of racial inequality at the core of the heart transplant race.

In 1968, Bruce Tucker, a black man, went into Virginia’s top research hospital with a head injury, only to have his heart taken out of his body and put into the chest of a white businessman. Now, in The Organ Thieves, Pulitzer Prize–nominated journalist Chip Jones exposes the horrifying inequality surrounding Tucker’s death and how he was used as a human guinea pig without his family’s permission or knowledge.

The circumstances surrounding his death reflect the long legacy of mistreating African Americans that began more than a century before with cadaver harvesting and worse. It culminated in efforts to win the heart transplant race in the late 1960s. Featuring years of research and fresh reporting, along with a foreword from social justice activist Ben Jealous, “this powerful book weaves together a medical mystery, a legal drama, and a sweeping history, its characters confronting unprecedented issues of life and death under the shadows of centuries of racial injustice” (Edward L. Ayers, author of The Promise of the New South).

Praise For The Organ Thieves: The Shocking Story of the First Heart Transplant in the Segregated South…

"Chip Jones's The Organ Thieves is the brilliantly researched and written story of how Jim Crow racism infected the medical profession during the Cold War era. The twists and turns in this Virginia saga are astonishingly sad and at times triumphant. Every page is a revelation. A must read!" —Douglas Brinkley, Katherine Tsanoff Brown Chair in Humanities and professor of history at Rice University and author of American Moonshot:  John F. Kennedy and the Great Space Race.

“Startling… A powerful story that examines institutional racism, mortality, medical ethics, and the nature of justice for black men living in the American South… A moving exploration of an unthinkable trespass against an innocent man.” —Kirkus Reviews

“Doggedly reported… A dramatic and fine-grained exposé of the mistreatment of black Americans by the country’s white medical establishment.” —Publishers Weekly

“Chip has a remarkable talent for uncovering and telling stories. The years he has spent on this book shed light on this fascinating and alarming slice of history.” –Derek Jeter, National Baseball Hall of Famer, executive, entrepreneur, and philanthropist

“A shocking account, reminiscent of The Immortal Life of Henrietta Lacks.” —Good Housekeeping

“With elements of legal and social history, this work is recommended for readers interested in the history of race and racism, and how it relates to medical practice in the United States.” —Library Journal

“Jones meticulously details how yet another significant achievement in America was disproportionately costly for black people. The Organ Thieves exhumes more than just bodies—it unearths human hopes, scientific ambitions, and devastating mistakes.”—Benjamin Jealous, former president and CEO of the NAACP and visiting scholar at the University of Pennsylvania’s Annenberg School for Communication

“This powerful book weaves together a medical mystery, a legal drama, and a sweeping history, its characters confronting unprecedented issues of life and death under the shadows of centuries of racial injustice.  Jones evokes each person and each scene with remarkable skill and compassion, recreating an America of the 1960s and 1970s that speaks directly to the dilemmas of the twenty-first century.” —Edward L. Ayers, winner of the Bancroft and Lincoln Prizes

"The Organ Thieves is a heartbreaker: for a family, for a community, for all the powerless and dispossessed. it exposes the dark well of racism, self-interest, and greed we always fight to hide. But like so many great books, it enters as tragedy and exits as a celebration of honesty, strength, and the power of a few good, dedicated people to change the world. Yes, it will steal your heart. I mean... obviously, right? But it will also get into your head and into your soul." —Bret Witter, #1 New York Times bestselling co-writer of The Monuments Men and The Master Plan

“A riveting true story of the race to perform the first heart transplant—a clash of humanity and science that redefined the legal meaning of ‘life.’ Jones brilliantly explores the racial inequities of the unreconstructed South of 1968 and at last brings a modicum of justice to Bruce Tucker, a man whose legacy was his actual heart.” —Dean King, nationally bestselling author of Skeletons on the Zahara and The Feud

“When a great reporter meets the story he was born to tell, Chip Jones’s The Organ Thieves is the result. What happened to Bruce Tucker on an operating table in Richmond, Virginia in 1968 can’t be dismissed simply as the misdeeds of certain doctors in a certain city in a bygone era. Jones offers something richer and more complex. This extraordinary book raises fundamental questions about racial injustice and inequality that haunt us to this day.”  —Charles Slack, author of Liberty’s First Crisis and Hetty

“Chip Jones’s gripping story of the first heart transplant case in segregated Virginia is beautifully written and deeply researched. The Organ Thieves is a riveting and chilling account of how race and poverty affect medical science and medical care. I found Jones's book impossible to put down and just as impossible to forget.” —U.S. Army Brigadier General Ty Seidule, Professor Emeritus of History at West Point

“In this captivating true story, journalist Chip Jones outlines how ambitious surgeons took a black man’s heart without his family’s consent and implanted it into a white man’s body in the name of scientific progress. The Organ Thieves is a gripping exposé unveiling racism at the heart of medical advances.” —Kristen Green, author of New York Times bestseller Something Must Be Done About Prince Edward County

"Beyond his meticulous scholarship, Jones is a magnificent writer who takes a classic case of medical malfeasance and converts it into a work that reads like a novel. If it were a novel, it would be a candidate for major awards, but it is a true story and even more likely to be used in medical schools across the country as well as courses in history and ethics." —John V. Moeser, professor emeritus of urban studies and planning at Virginia Commonwealth University

“A stirring, minute-by-minute saga… Jones has sifted through these events with great care, looking at all players, every side issue, and later results and fallout... His well-considered book has the power to open and change minds, and it ought to be widely read.” —BookReporter

Chip Jones has been reporting for nearly thirty years for the Richmond Times-Dispatch, The Roanoke Times, Virginia Business magazine, and other publications. As a reporter for The Roanoke Times, he was nominated for a Pulitzer Prize for his work on the Pittston coal strike. He is the former communications director of the Richmond Academy of Medicine, which is where he first discovered the heart-stopping story in The Organ Thieves.
Loading...
or support indie stores by buying on