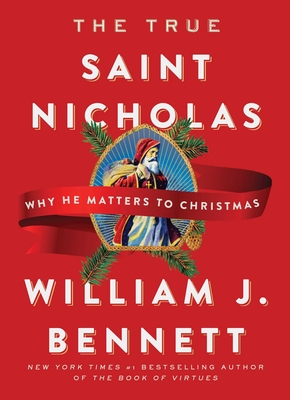 Why He Matters to Christmas

Former secretary of education and New York Times bestselling author William Bennett blends his historical expertise with his gift for storytelling into a heartwarming book about the man who ultimately became known as Santa Claus.

Beloved writer and speaker William Bennett brings the legendary Saint Nicholas to life in this fascinating and faith-affirming book that will change the way you think about Santa Claus and the meaning of Christmas. Bennett reflects on Saint Nicholas’s storied life, which has spanned seventeen centuries across Europe, Asia, and Africa, and reveals an inspiring tale of devotion to God and an example of eternal goodness.

The True Saint Nicholas: Why He Matters to Christmas focuses on three aspects of Saint Nicholas—historical facts from his life, his legacy in the centuries following his death, and the legendary status that transformed his likeness into the present-day jolly, toy-bearing Santa Claus. The book vividly captures the heart and life of someone who lived long ago—and yet whose life remains an inspiration for everyone to aspire to a higher order of generosity, giving, and devotion to others.

An instant classic by one of America’s most respected thinkers, The True Saint Nicholas is a memorable keepsake to be shared with family and friends every year to evoke the true spirit of Christmas.

William J. Bennett served as Director of the Office of National Drug Control Policy under President George H. W. Bush and as Secretary of Education and Chairman of the National Endowment for the Humanities under President Reagan. He holds a bachelor of arts degree in philosophy from Williams College, a doctorate in political philosophy from the University of Texas, and a law degree from Harvard. He is the author of such bestselling books as The Educated Child, The Death of Outrage, The Book of Virtues, and the two-volume series America: The Last Best Hope. Dr. Bennett is the former host of the nationally syndicated radio show Bill Bennett's Morning in America and the current host of the popular podcast, The Bill Bennett Show. He is also the Washington Fellow of the Claremont Institute and a regular contributor to CNN. He, his wife, Elayne, and their two sons, John and Joseph, live in Maryland.
or support indie stores by buying on
Copyright © 2020 American Booksellers Association