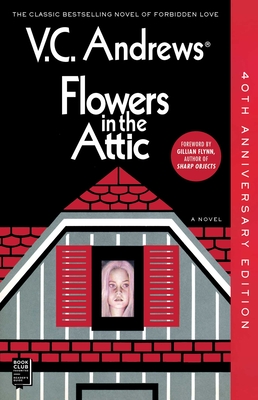 Flowers in the Attic

Celebrate the fortieth anniversary of the enduring gothic masterpiece Flowers in the Attic—the unforgettable forbidden love story that earned V.C. Andrews a fiercely devoted fan base and became an international cult classic.

At the top of the stairs there are four secrets hidden—blond, innocent, and fighting for their lives…

They were a perfect and beautiful family—until a heartbreaking tragedy shattered their happiness. Now, for the sake of an inheritance that will ensure their future, the children must be hidden away out of sight, as if they never existed. They are kept in the attic of their grandmother’s labyrinthine mansion, isolated and alone. As the visits from their seemingly unconcerned mother slowly dwindle, the four children grow ever closer and depend upon one another to survive both this cramped world and their cruel grandmother. A suspenseful and thrilling tale of family, greed, murder, and forbidden love, Flowers in the Attic is the unputdownable first novel of the epic Dollanganger family saga.

The Dollanganger series includes: Flowers in the Attic, Petals in the Wind, If There Be Thorns, Seeds of Yesterday, Garden of Shadows, Beneath the Attic, and Out of the Attic.

One of the most popular authors of all time, V.C. Andrews has been a bestselling phenomenon since the publication of Flowers in the Attic, first in the renowned Dollanganger family series, which includes Petals on the Wind, If There Be Thorns, Seeds of Yesterday, and Garden of Shadows. The family saga continues with Christopher’s Diary: Secrets of Foxworth, Christopher’s Diary: Echoes of Dollanganger, and Secret Brother, as well as Beneath the Attic, Out of the Attic, and Shadows of Foxworth as part of the fortieth anniversary celebration. There are more than ninety V.C. Andrews novels, which have sold over 107 million copies worldwide and have been translated into twenty-five foreign languages. Andrews’s life story is told in The Woman Beyond the Attic. Join the conversation about the world of V.C. Andrews at Facebook.com/OfficialVCAndrews.
Loading...
or support indie stores by buying on