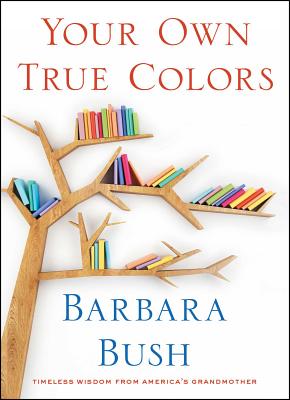 Your Own True Colors

An inspiring and beautiful way to commemorate Barbara Bush—the complete text of her historic speech to the 1990 graduating class of Wellesley College, which NPR included in their list of the “Best Commencement Speeches, Ever.”

Barbara Bush is one of America’s most beloved first ladies, and one of only two in our history to be both the wife and the mother of a President. Celebrated for her wit, compassion, candor, and ebullience, she was embraced on both sides of the political aisle.

In the outpouring of national admiration and affection in the days following her death in the spring of 2018 at age ninety-two, many remembered the commencement address Mrs. Bush gave to the Wellesley College class of 1990. She urged the graduates to believe in something larger than themselves, citing her own commitment to literacy and her belief that, “if more people could read, write, and comprehend, we would be much closer to solving many of the problems plaguing our society.”

Filled with timeless wisdom, Your Own True Colors is a perfect gift book for graduation or any occasion. Barbara Bush’s message about men, women, diversity, and big ideals—finding one’s own true colors—is as timely, important, and inspiring as ever.

Barbara Bush (1925—2018) was born in Rye, New York, and married George H.W. Bush in 1945. She served as First Lady of the United States from 1989 to 1993. She has five children, including President George W. Bush and Florida Governor Jeb Bush, seventeen grandchildren, and eight great-grandchildren. She founded the Barbara Bush Foundation for Family Literacy. She lived in Houston, Texas, and Kennebunkport, Maine.
Loading...
or support indie stores by buying on
(This book is on backorder)