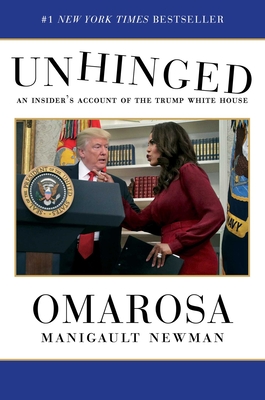 The former Assistant to the President and Director of Communications for the Office of Public Liaison in the Trump White House provides an eye-opening look into the corruption and controversy of the current administration.

Few have been a member of Donald Trump’s inner orbit longer than Omarosa Manigault Newman. Their relationship has spanned fifteen years—through four television shows, a presidential campaign, and a year by his side in the most chaotic, outrageous White House in history. But that relationship has come to a decisive and definitive end, and Omarosa is finally ready to share her side of the story in this explosive, jaw-dropping account.

A stunning tell-all and takedown from a strong, intelligent woman who took every name and number, Unhinged is a must-read for any concerned citizen.

Praise For Unhinged: An Insider's Account of the Trump White House…

“This entertaining, gossipy memoir of White House dysfunction will be catnip to scandal lovers.”
— Publishers Weekly

“Omarosa Manigault Newman sashays in for the kill in Unhinged…deftly executed.”
— The Guardian

“The impress of Omarosa’s personality on the page is indelible and mesmerizing...Unhinged is such a pleasure to read because it is unashamedly, thrillingly vindictive.”
— The Weekly Standard

“[Unhinged] has all the ingredients of a great novel; power, sex, race and money… a prime candidate for this summer’s best in beach reading.”
— The Guardian

“Manigault Newman has unleashed Trump’s own tricks and tactics against him.”
— The Washington Post

“A deeply critical portrait of the president.”
— Time

“Newman has written a revealing book…Her accounts of trying to connect Trump with black voters during the 2016 presidential campaign are priceless.”
— Financial Times

Omarosa Manigault Newman is the former Director of Communications for the Office of Public Liaison in Donald Trump’s White House, and was an aide in the Office of Presidential Personnel and the Office of the Vice President in the Clinton White House. She has served as an adjunct professor in the Howard University School of Business. Prior to joining the Trump administration, Omarosa served as a chaplain in the California State Military Reserve. She currently serves in pastoral ministry at The Sanctuary @ Mt. Calvary Baptist Church in Jacksonville, Florida, where her husband, John Allen Newman, is the senior pastor.
Loading...
or
Not Currently Available for Direct Purchase