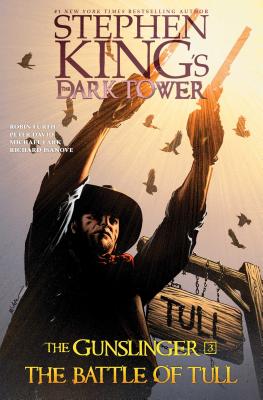 The Battle of Tull (Stephen King's The Dark Tower

Following the road through the Mohaine Desert, Roland continues his epic search for the elusive Man in Black. Instead, he finds Tull, the last stop of civilization. A town of devil grass, desert sand, and despair…full of nothing, especially mercy. It may seem Tull is on the very edge of the world, with little past the horizon but a steep fall to oblivion. But Roland believes otherwise…that beyond the limits of Tull lies a hidden truth that means everything to the fate of Mid-World. The Man in Black holds the key to that mystery, and Roland is going to keep following him—even through a deadly trap set here in this town—to unlock it.