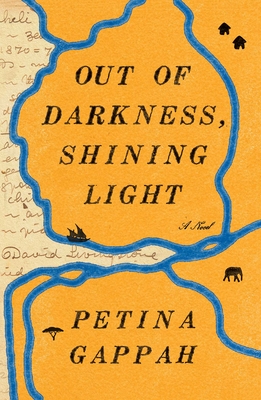 Out of Darkness, Shining Light

WINNER OF THE 2020 CHAUTAUQUA PRIZE

“Engrossing, beautiful, and deeply imaginative, Out of Darkness, Shining Light is a novel that lends voice to those who appeared only as footnotes in history, yet whose final, brave act of loyalty and respect changed the course of it. An incredible and important book by a masterful writer.” ​—Yaa Gyasi, author of Homegoing

“This is how we carried out of Africa the poor broken body of Bwana Daudi, the Doctor, David Livingstone, so that he could be borne across the sea and buried in his own land.” So begins Petina Gappah's powerful novel of exploration and adventure in nineteenth-century Africa—the captivating story of the loyal men and women who carried explorer and missionary Dr. Livingstone's body, his papers and maps, fifteen hundred miles across the continent of Africa, so his remains could be returned home to England and his work preserved there. Narrated by Halima, the doctor's sharp-tongued cook, and Jacob Wainwright, a rigidly pious freed slave, this is a story that encompasses all of the hypocrisy of slavery and colonization—the hypocrisy at the core of the human heart—while celebrating resilience, loyalty, and love.

Praise For Out of Darkness, Shining Light: A Novel…

A Lit Hub, Millions, and Buzzfeed Most Anticipated Book

“Petina Gappah lists at least 30 books in the bibliography of her scrupulously researched new novel. This being the case, one imagines the author might well be dealing with subject matter that leaves precious little room for her to reinvent, to present us with a new view of a man whose story has been so thoroughly picked over. However, Gappah has chosen an ingenious way to approach Livingstone’s life: She focuses on his death…After all, the real heroes of this carefully crafted novel are Halima and Wainwright and the other Africans history has hitherto condemned to suffer in silence. It is to the novel’s credit that after 150 years we can now hear their voices.”
—The New York Times Book Review

"David Livingstone, the 19th-century Scottish missionary who set out to find the source of the Nile, casts a long shadow over East Africa, and Gappah explores his legacy in her new novel. Narrated by Halima, Livingstone’s cook and slave, and Jacob, a pious freed slave, as Livingstone’s corpse is taken to the coast of Africa, the story offers a fresh look at the enduring history of colonialism."
—The New York Times, 17 New Books to Watch For in September

“Based on Livingstone’s journals and narrated by his gossipy cook and a freedman with a messiah complex, this textured novel illuminates the agonies of colonialism and blind loyalty—Conrad’s heart of darkness in reverse.”
—O, the Oprah Magazine

“Ambitious…There are love triangles, power struggles, brushes with slave traders, clashes with hostile strangers—even murder. Livingstone left "a track of light where the white men who followed him could go in perfect safety," Gappah writes, referring to the ensuing Scramble for Africa, in which the continent was divided up among European powers. Gappah’s characters foresee but cannot stop a future that haunts the novel.”
—The New Yorker

“Searing, poignant, often hilarious…Gappah’s treatment of her characters’ odyssey, by turns playful and tragic, is underpinned by a larger theme: the legacy of colonization…The result is an intricate storytelling that delves deep into the disturbing yet indelible relationship between two continents, with the enigmatic Livingstone both an avatar of colonial aggression and a figure beloved by the people who knew him best. Out of Darkness, Shining Light beautifully evokes the moral ambiguities that lurk within the human heart, revealing a talent that continues to grow from book to book.”
—The Minneapolis Star-Tribune

"Petina Gappah’s work of historical fiction delves into the story of two African servants of famed 19th-century explorer David Livingstone. After Livingstone’s death, the pair are among those who transport his body, and his notes, 1,000 miles to ensure the body’s safe return to England. The novel glows with the insightful voices of the two servants and the strength of their devotion."
—Christian Science Monitor, Best Books of September

"Perhaps no story was as ripe for the Wide Sargasso Sea treatment (the revision of a classic by marginalized voices) as the tale of missionary David Livingstone’s death in Africa. In contrasting styles, the Zimbabwean novelist lets two characters describe their trek across Africa with Livingstone’s body, beautifully complicating the narrative."
—Vulture, Best and Biggest Books to Read This Fall

“Petina Gappah's novel is about exploration and adventure in nineteenth-century Africa—the captivating story of the loyal men and women who carried explorer and missionary Dr. Livingstone's body, his papers and maps, fifteen hundred miles across the continent of Africa, so his remains could be returned home to England and his work preserved there.”
—E! Online, 15 Books to Cozy Up with This Fall

“We need novels like Gappah’s Out of Darkness, Shining Light, for they remember the stories that have been papered over by history—by whiteness and empire…stories like Halima’s and Jacob’s, told through Gappah’s expert characterization, are not not-real. They are the possibilities always at the edges of the master narratives we learn; they need only to be brought out of the darkness,”
—World Literature Today, Winter 2020 Book Reviews

"Gappah decolonizes the legend of Dr. Livingstone by turning the tale inside out, giving voice to those who are overlooked in the official narratives. The result is an indictment of the legacy of slavery and colonialism that is also an engrossing adventure story.”
—Library Journal, starred

“Fascinating … David Livingstone, as I learned from this novel, was this very complex individual who was an early British abolitionist—yet had slaves—who devoted his life to finding the source of the Nile. What Petina Gappah has done in this novel is write about what happened after his death.”
—Nancy Pearl, NPR, Four Fantastic Books For The End Of 2019

“Like the changing interpretations of David Livingstone’s work, [Heart of Darkness], once a pillar of the canon, must move aside to make room for other perspectives. Petina Gappah’s book gives us one such perspective. In the characters of Halima and Jacob, the author has created two voices whose authenticity and resonance provide both weight and vitality to this tale of darkness and light,”
—Lorna Kearns, Pittsburgh Post-Gazette

"Riveting ... a deeply layered exploration of courage, sorrow, and resilience, culminating in a revelatory quest and an entracing vision."
—Booklist

“Engrossing, beautiful, and deeply imaginative, Out of Darkness, Shining Light, is a novel that lends voice to those who appeared only as footnotes in history, yet whose final, brave act of loyalty and respect changed the course of it.  An incredible and important book by a masterful writer.”
—Yaa Gyasi, author of Homegoing

“Petina Gappah’s Out of Darkness, Shining Light describes a world on the cusp of change.  Her narrators, Halima and Jacob, both former slaves—along with a cohort of sixty-some Africans and Arabs—carry a dead muzungu (white person) for nine months across impossible 19th-century African terrain. While they ultimately reach their destination, delivering a wizened body to the awaiting arms of their future colonizers, the greater catastrophe is still to come. Petina Gappah knows what she writes; her historical and cultural insights add texture and veracity to every page. A powerful novel, beautifully told, Out of Darkness, Shining Light reveals as much about the present circumstances as the past that helped create them.”
—Jesmyn Ward, author of Sing, Unburied, Sing

“Mixing painstaking research with a formidable imagination, Petina Gappah resurrects the brave, misguided, heroic, and ill-starred party who hauled the dried-up corpse of Dr. David Livingstone across 1,000 miles of African interior to the Indian Ocean. Her narrators, a hilarious cook named Halima and a sanctimonious Christian named Jacob, cut a swath through a continent at the crossroads of colonization, superstition, religion and slavery, illuminating the contradictions inherent in every life. This is a beautiful novel.”
—Anthony Doerr, author of All the Light We Cannot See

“A sweeping epic that is also startlingly intimate, Out of Darkness, Shining Light is a revelation.  In luminous prose, Petina Gappah gives voice to people silenced by history, allowing them the full scope of their humanity, from petty gossip to self-righteous evangelism to romantic longings and dreams for the future. She grapples with what it means to explore other cultures, to seek answers to the questions ‘what if?’ and ‘what else?’ In doing so, she holds a funhouse mirror up to colonialist narratives like Heart of Darkness, revealing their distortions.”
—Christina Baker Kline, author of Orphan Train

Petina Gappah is a widely translated Zimbabwean writer. She is the author of two novels, Out of Darkness, Shining Light; The Book of Memory; and two short story collections, Rotten Row and An Elegy for Easterly. Her work has been short-listed for the Orwell Prize, the Sunday Times EFG Short Story Award, the Los Angeles Times Book Prize, the PEN/Open Book Award, the Frank O’Connor International Short Story Award, and the Prix Femina (etranger), among other honors. She is the recipient of the Guardian First Book Award and the McKitterick Prize from the Society of Authors. A lawyer specializing in international trade and investment as well as a writer, Petina currently lives in Harare, Zimbabwe.