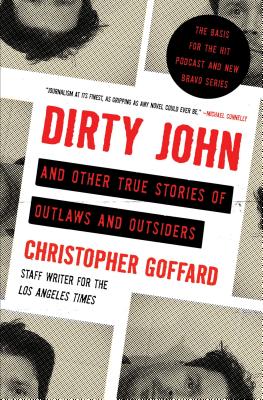 Dirty John and Other True Stories of Outlaws and Outsiders

Since its release in fall 2017, the “Dirty John” podcast—about a conman who terrorizes a Southern California family—has been downloaded more than 20 million times, and will soon premiere as a scripted drama on Bravo starring Connie Britton and Eric Bana. The story, which also ran as a print series in the Los Angeles Times, wasn’t unfamiliar terrain to its writer, Christopher Goffard. Over two decades at newspapers from Florida to California, Goffard has reported probingly on the shadowy, unseen corners of society. This book gathers together for the first time “Dirty John” and the rest of his very best work.

“The $40 Lawyer” provides an inside account of a young public defender’s rookie year in the legal trenches. “Framed” offers an unblinking chronicle of suburban mayhem (and is currently being developed by Netflix as a film starring Julia Roberts). A man wrongly imprisoned for rape, train-riding runaways in love, a Syrian mother forced to leave her children in order to save them, a boy who grows up to become a cop as a way of honoring his murdered sister, another boy who struggles with the knowledge that his father is on death row: these stories reveal the complexities of human nature, showing people at both their most courageous and their most flawed.

Goffard shared in the Los Angeles Times’ Pulitzer Prize for Public Service in 2011 and has twice been a Pulitzer finalist for feature writing. This collection—a must-read for fans of both true-crime and first-rate narrative nonfiction—underscores his reputation as one of today’s most original journalistic voices.

“This collection is journalism at its finest. Incisively reported and eloquently written, these stories reveal heartbreak and heroism and the frayed fabric of life. As gripping as any novel could ever be, every one of these stories cuts down to the bone. Christopher Goffard is a storyteller for these times.” —Michael Connelly

"The stories in Dirty John take about an hour each to read, and (I'm predicting) close to forever to collectively forget. Los Angeles Times writer Christopher Goffard is so talented, and this collection of true crime/human drama is so exceptional, that I suspect the spirits of David Halberstam and A.J. Liebling are impressed. Read this book, and I promise that you will be too." —Jeff Guinn, author of Manson and The Road to Jonestown

“Christopher Goffard, one of the world's most beguiling journalists, searches among the forgotten and the invisible for insights into how all of us live, how we die, and how we piece together whatever meaning we can along the way. This collection seals his reputation as a master and brims with stories so unforgettably vivid and heartstopping that they refuse to let the reader go until the last word of the last sentence.” —Thomas French, Pulitzer Prize-winning journalist and author of Zoo Story

“Here are fifteen of the best stories in contemporary journalism by an award-winning reporter known for his research and accuracy, but whose work reads as well as the best in modern fiction. Goffard is a great storyteller whose pieces I read over and over for insight, inspiration and pure pleasure." —William Friedkin, Oscar-winning director of The Exorcist and The French Connection

“Dirty John and Other True Stories of Outlaws and Outsiders is a lovely collection of literary journalism, written by a master of the form. Christopher Goffard’s gracefully nuanced stories, full of feeling and finely observed detail, are always heading somewhere, always unfolding with an exquisite sense of narrative.  These stories are about seekers and searchers—people who want something, who need something. Goffard wonderfully conveys their quietly desperate worlds.” —Barry Siegel, Pulitzer Prize-winning journalist and director of the literary journalism program at the University of California, Irvine

"[Goffard has] collected some of his best stories like Dirty John into one book that all true crime fans are going to love...A compelling collection of true tales that read more like fiction, Dirty John is an addictive read." —Bustle

Christopher Goffard is one of America's most acclaimed literary journalists. He has written for the St. Petersburg Times and the Los Angeles Times. He is the author of You Will See Fire: A Search for Justice in Kenya, based on his Los Angeles Times series; the novel Snitch Jacket, which was a finalist for the Edgar Allan Poe Award for Best First Novel; and Dirty John and Other True Stories of Outlaws and Outsiders. His work appears regularly in the Best American Newspaper Narratives series.
Loading...
or
Not Currently Available for Direct Purchase