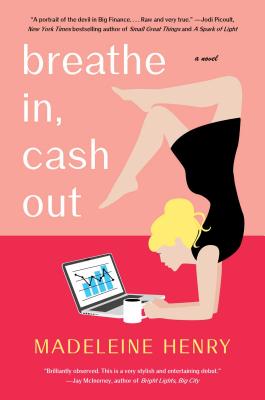 “For when you want the ultimate beach read...Enter Madeleine Henry’s Breathe In, Cash Out. It’s The Devil Wears Prada meets Wall Street.” —The Skimm

“This is a portrait of the devil in Big Finance, which promises untold riches in return for serving an inhumane master. Allegra’s fictional story is raw, unnerving, and sadly, very true.” —Jodi Picoult, New York Times bestselling author of Small Great Things and A Spark of Light

In this sizzling debut for fans of The Devil Wears Prada, Wall Street banking analyst Allegra Cobb plans to quit the minute her year-end bonus hits her account, finally pursuing her yoga career full-time. But when she forms an intense relationship with the #InstaFamous guru who may hold the ticket to the life Allegra's always wanted—she's not sure if she'll be able to keep her sanity intact (and her chakras aligned) until bonus day.

But her plan isn’t quite as perfect as the beachfront yoga pictures she double-taps on Instagram. On top of the 100 emails an hour and coworkers already suspicious of her escape plan, Allegra's hard-driving single father has always expected fiercely high achievement above all else. That his daughter works on Wall Street means everything to him. Still, she marches on, taking it day by extremely caffeinated day.

But after (1) unknowingly sleeping with the man now leading her banking cohort on one of their biggest deals to date and (2) meeting the #blessed yoga guru who might just be her ticket to the life she’s always wanted, it really hits her: her happy-ever-after will be harder to manifest than she thought.

Fast-paced, laugh-out-loud funny, and totally irresistible, this is the story of a fearless young woman determined to center herself in the life she truly wants.

"Breathe In, Cash Out is a complete delight. Madeleine Henry’s writing is funny and as bracing as her heroine’s daily caffeine intake (which is insane). But this novel is more than entertainment: it's a compelling, thoughtful story about how women work today--our ambitions, our uncertainties, and the pressures we’re under to please others as much as ourselves. Henry probes these issues with wit and warmth and a keen eye for the absurd. The result is a modern fairytale, a romance that’s not about finding the right guy, but finding yourself."
—Eliza Kennedy, author of I Take You and Do This for Me

"Debut author Henry has a background in both investment banking and yoga, and she imbues the story with believable and horrific details that perfectly illustrate how cutthroat and all-consuming the world of banking is… A sharp and funny look at an unhappy woman's quest to manifest a better life.”
—Kirkus Reviews

“Perfect for fans of fiction about women who ditch the cutthroat to follow their passion.”
—Booklist

"If you’re deep in the dating scene, crushing your career goals, and having a blast, you won’t be able to put down this story of a young woman juggling her priorities while living and working in New York City."
—Elite Daily

“Debut novelist Henry, who has firsthand experience in investment management and yoga, delivers an awesomely titled tale that is, without a doubt, an addition to the chick lit oeuvre: imagine Andy from The Devil Wears Prada and Bridget Jones meeting for cocktails… The wit that pervades Allegra's search for #bliss and the requisite quirky supporting cast make this a fab read for chick lit fans.”
—Library Journal

Madeleine Henry is the author of two novels, The Love Proof and Breathe In, Cash Out. The Love Proof was selected by The New York Times as a New and Noteworthy book, and her novels have featured in The Washington Post, The New York Post, and Entertainment Weekly. Previously, she worked at Goldman Sachs after graduating from Yale in 2014. She shares more about her life on Instagram @MadeleineHenryYoga.
Loading...
or
Not Currently Available for Direct Purchase