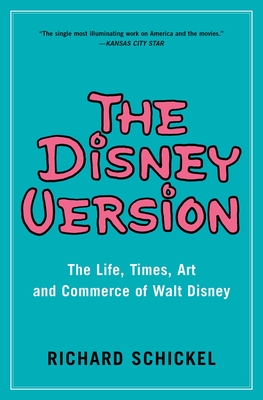 The Life, Times, Art and Commerce of Walt Disney

“The single most illuminating work on America and the movies” (The Kansas City Star): the story of how a shy boy from Chicago crashed Hollywood and created the world’s first multimedia entertainment empire—one that shapes American popular culture to this day.

When Walter Elias Disney moved to Hollywood in 1923, the twenty-one-year-old cartoonist seemed an unlikely businessman—and yet within less than two decades, he’d transformed his small animation studio into one of the most successful and beloved brands of the twentieth century. But behind Disney’s boisterous entrepreneurial imagination and iconic characters lay regressive cultural attitudes that, as The Walt Disney Company’s influence grew, began to not simply reflect the values of midcentury America but actually shape the country’s character.

Praise For The Disney Version: The Life, Times, Art and Commerce of Walt Disney…

“One of the best studies ever done on American popular culture. Consistently intelligent and eminently readable.”
— Stephen J. Whitfield, Professor of American Civilization at Brandeis University

“Schickel’s unauthorized biography of Walt Disney… may be the single most illuminating work on America and the movies.”
— The Kansas City Star

“[The Disney Version] established the terms of interpretation and debate about Disney... [and] remains the most analytically and aesthetically penetrating portrait.”
— The Atlantic

“The Disney Version is a model of good judgment, exemplary in balance and impeccable in tone.”
— Commentary

“The story of how Disney built an empire on corrupt popular culture… becomes a revealing part of American cultural history.”
— The New Yorker

Richard Schickel was the longtime film critic for Time magazine and the writer-producer of a number of documentaries about Hollywood and the movies. His books include D.W. Griffiths: An American Life, His Picture in the Papers, The Men Who Made the Movies, Intimate Strangers, and The Disney Version.
Loading...
or support indie stores by buying on