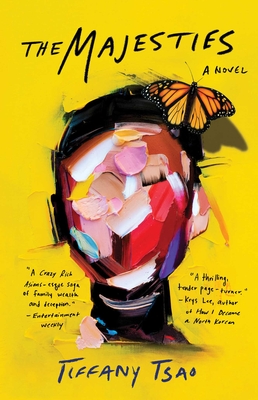 In this “bold and dramatic portrayal of characters on the cusp of an impossible choice” (Publishers Weekly), two sisters from a wealthy Chinese-Indonesian family grapple with secrets and betrayal after one of them poisons their entire family.

As Gwendolyn struggles to regain consciousness, she desperately retraces her memories, trying to uncover the moment that led to this shocking act. Was it their aunt’s mysterious death at sea? Estella’s unhappy marriage to a dangerously brutish man? Or were the shifting loyalties and unspoken resentments at the heart of their opulent world too much to bear? Can Gwendolyn, at last, confront the carefully buried mysteries in their family’s past and the truth about who she and her sister really are?

Traveling from the luxurious world of the rich and powerful in Indonesia to the most spectacular shows at Paris Fashion Week, from the sunny coasts of California to the melting pot of Melbourne’s university scene, The Majesties “is a thrilling, tender page-turner” (Krys Lee, author of Drifting House) as well as “a sobering look at the dark side of extreme wealth” (Kirkus Reviews).

“Tsao manages to make her characters sympathetic even if they are unlikeable — which is difficult for even the most seasoned of authors. . . . Any wealthy family, especially one as incredibly rich as the Sulinados, likely made their fortune through a mix of good business sense and utter ruthlessness, and it's the latter that makes The Majesties so compelling. . . . Tsao excels at delivering biting social commentary while also telling a riveting story. It's dark and often bleak, to be sure, but that never weighs the narrative down. I raced through The Majesties, unsure of how I wanted it to resolve, but knowing I wanted to arrive at some kind of satisfaction, a sense of relief after the darkness had washed over me. But the fact is, a book that grapples with such systemic, ongoing problems could never have ended cleanly, nor did it. . . . It's shocking how enjoyable and delicious this dark, disturbing novel was, and that unease will sit with me for a long time to come.” —Swapna Krishna, NPR

Tiffany Tsao was born in San Diego, California, and lived in Singapore and Indonesia during her childhood and young adulthood. She is a graduate of Wellesley College and the University of California, Berkeley, where she earned a PhD in English. In addition to writing, she translates Indonesian fiction and poetry.
Loading...
or support indie stores by buying on