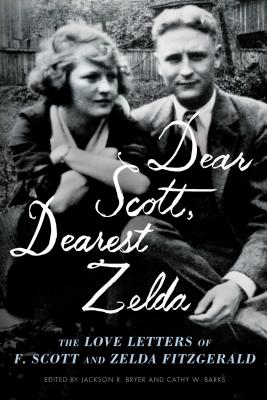 The Love Letters of F. Scott and Zelda Fitzgerald

“Pure and lovely…to read Zelda’s letters is to fall in love with her.” —The Washington Post

Edited by renowned Jackson R. Bryer and Cathy W. Barks, with an introduction by Scott and Zelda Fitzgerald's granddaughter, Eleanor Lanahan, this compilation of over three hundred letters tells the couple's epic love story in their own words.

Scott and Zelda Fitzgerald's devotion to each other endured for more than twenty-two years, through the highs and lows of his literary success and alcoholism, and her mental illness. In Dear Scott, Dearest Zelda, over 300 of their collected love letters show why theirs has long been heralded as one of the greatest love stories of the 20th century.

Edited by renowned Fitzgerald scholars Jackson R. Bryer and Cathy W. Barks, with an introduction by Scott and Zelda's granddaughter, Eleanor Lanahan, this is a welcome addition to the Fitzgerald literary canon.

“Zelda writes in direct yet passionate prose, Fitzgerald with a poetic flair reminiscent of his fiction. The result is an engrossing account of their love story — full of longing and ardor, heartbreak and betrayal…their letters portray something  a singular, enigmatic connection.”
—Paul Alexander, The Washington Post

“Read this book for Zelda… a funny, hard-boiled observer of her own life whose letters read like short stand-up sequences… She has no secondhand impressions or turns of phrase — everything she writes and thinks feels tart, original, lightly distressing… after reading these letters what strikes you is [the Fitzgeralds’] steadiness, a shocking word to apply to them… their bond proved stubborn and sturdy, and survived it all.” –Parul Sehgal, The New York Times

"A moving portrait of a two-decades-long, complicated, and deep love affair."
—Publishers Weekly

"A rich, poignant portrait of [the Fitzgeralds'] complicated relationship."
—The Baltimore Sun

"This exceptionally moving correspondence reveals two ardent and creative souls struggling with the ruthless demands of the artistic imperative."
—Booklist

"A boon for general readers as well as literary scholars."
—Kirkus Reviews

"Bryer and Barks's work leads readers through one of the most passionate love affairs of the twentieth century."
—Montgomery Advertiser

Eleanor Lanahan attended Sarah Lawrence College and the Rhode Island School of Design. After twenty years of commercial illustration and for children’s books under the married name Eleanor Hazard, she illustrated The Big Green Book by Madeleine Kunin and Marilyn Stout. As Eleanor Lanahan, she wrote the books Scottie, The Daughter of... and Zelda, An Illustrated Life, as well as animated the movies The Naked Hitch-Hiker and One Alcoholic to Another. Lanahan lives in Vermont.
Loading...
or support indie stores by buying on