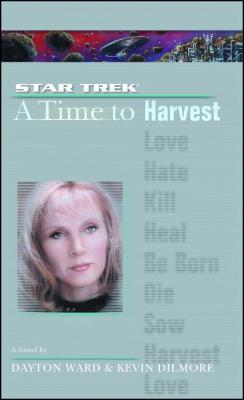 A Time to Harvest (Star Trek: The Next Generation #4)

Kevin Dilmore has teamed with author Dayton Ward for fifteen years on novels, shorter fiction, and other writings within and outside the Star Trek universe. His short stories have appeared in anthologies including Native Lands by Crazy 8 Press. By day, Kevin works as a senior writer for Hallmark Cards in Kansas City, Missouri. In 2014, a short film written by Kevin, “Outside of Town,” was selected for screening in the Short Film Corner of the Cannes Film Festival. A graduate of the University of Kansas, Kevin lives in Overland Park, Kansas.