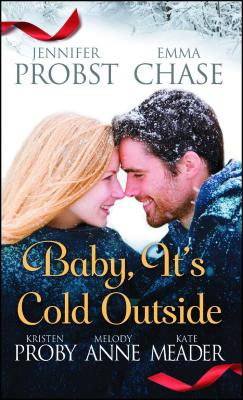 Baby, It's Cold Outside (Paperback)

Outside it may be frosty, so turn the heat way up with these stories of desire!

Can a determined woman executive and a playboy billionaire survive being stranded together in a snowstorm? Jennifer Probst depicts an encounter almost too hot to handle…

Drew and Kate play an encore to Tangled in this sexy take on a “Christmas Carol” by Emma Chase. When a Christmas Eve argument condemns Drew to a troubled night, three dream women teach him that no gift could be more tantalizing than Kate…

With Kristen Proby, ski slopes are quite delightful. Grace Douglas is sure she’ll never learn to ski, but instructor Jacob Baxter could teach her lessons of a different kind…

What could be hotter than a firefighter? Kate Meader shows how hot it can get as Beck Rivera and heiress-turned-tattoo-artist Darcy Cochrane discover that nothing ignites holiday flames like rekindling a lost love…

Jennifer Probst wrote her first book at twelve years old. She bound it in a folder, read it to her classmates, and hasn’t stopped writing since. She took a short hiatus to get married, get pregnant, buy a house, get pregnant again, pursue a Master’s degree in English literature, and rescue two shelter dogs. Now she is writing again. She is the New York Times, USA TODAY, and Wall Street Journal bestselling author of sexy and erotic contemporary romance. She was thrilled her book, The Marriage Bargain spent twenty-six weeks on the New York Times bestseller list. Her work has been translated in over a dozen countries, sold over a million copies, and was dubbed a “romance phenom” by Kirkus Reviews. She makes her home in upstate New York with the whole crew. Her sons keep her active, stressed, joyous, and sad her house will never be truly clean.

By day, Emma Chase is a devoted wife and mother who lives in a small, rural town in New Jersey. By night, she toils away bringing her colorful characters and their endless antics to life. Writing has always been her passion, and the release of her debut romantic comedy Tangled was nothing less than a dream come true. The subsequent books in her delightful, beloved series include Twisted, Tamed, and Tied. She is also the author of Sustained from her sexy new Legal Briefs series.

Kristen Proby is the New York Times bestselling author of the Love Under the Big Sky trilogy and the self-published With Me in Seattle and Boudreaux series. She lives in the Pacific Northwest.

Melody Anne is the New York Times bestselling author of the Unexpected Heroes series—a spin-off of her wildly popular Billionaire Bachelors novels featuring the handsome Anderson men—as well as the Tycoons series and the Surrender series. She lives in the Pacific Northwest.

Originally from Ireland, Kate Meader cut her romance reader teeth on Maeve Binchy and Jilly Cooper novels, with some Harlequins thrown in for variety. Give her tales about brooding mill owners, oversexed equestrians, and men who can rock an apron, a fire hose, or a hockey stick, and she's there. Now based in Chicago, she writes sexy contemporary romance with alpha heroes and strong heroines (and heroes) who can match their men quip for quip. Visit her at KateMeader.com.
or
Buy Here
Copyright © 2020 American Booksellers Association