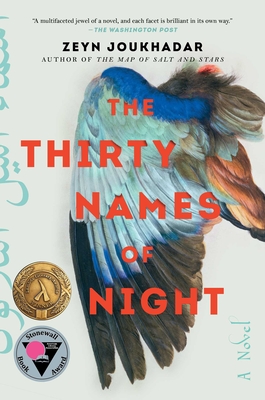 The Thirty Names of Night

​The author of the “vivid and urgent…important and timely” (The New York Times Book Review) debut The Map of Salt and Stars returns with this remarkably moving and lyrical novel following three generations of Syrian Americans who are linked by a mysterious species of bird and the truths they carry close to their hearts.

"The Thirty Names of Night is a multifaceted jewel of a novel and each facet is brilliant in its own way....Joukhadar is a richly poetic writer…This incredibly courageous novel, full of suspense and discoveries, reminds us of the dignity we all deserve and the pain suffered by those who still feel the need to hide themselves.”
— Washington Post

“With tinges of magic realism and beautifully rendered descriptions of birds flitting in and out of characters’ lives…The Thirty Names of Night stands out for its lyrical quality."
— The New York Times Book Review

“Joukhadar’s prose is poetic and painterly, mirroring the artistic bent of its narrator, and the book is ultimately a joyful one”."
— San Francisco Chronicle

"Long after the story ended, I remain haunted by Zeyn Joukhadar’s novel, The Thirty Names of Night: part ghost story, part history, part art, all magic. Using gorgeous prose, Joukhadar deftly takes the reader on a journey of migration and belonging, explores the price of silence and of secrets, and tells an exquisite tale of family and love."
— Devi S. Laskar, author of The Atlas of Reds and Blues

“The Thirty Names of Night crafts a gorgeous new subgenre of poetic-reality.  In Joukhadar's intensely atmospheric New York, the portal to a universe of information is not technology, but ornithology.  A lush, passionate eco-urban fable, and a truly glorious book.”
— Jordy Rosenberg, author of Confessions of the Fox

"A fable of being and belonging....Joukhadar's prose style--folkloric, lyrical, and emotionally intense--creates its own atmosphere.  Gorgeous and alive."
— Kirkus Reviews, starred review

"Quietly lyrical and richly imaginative...this is a stirring portrait of an artist as a young man."
— Publishers Weekly

Zeyn Joukhadar is the author of The Map of Salt and Stars and The Thirty Names of Night. He is a member of the Radius of Arab American Writers (RAWI) and of American Mensa. Joukhadar’s writing has appeared in Salon, The Paris Review, The Kenyon Review, and elsewhere and has been nominated for a Pushcart Prize and the Best of the Net. The Map of Salt and Stars was a 2018 Middle East Book Award winner in Youth Literature, a 2018 Goodreads Choice Awards Finalist in Historical Fiction, and was shortlisted for the Wilbur Smith Adventure Writing Prize. He has received fellowships from the Montalvo Arts Center, the Arab American National Museum, the Bread Loaf Writers’ Conference, the Camargo Foundation, and the Josef and Anni Albers Foundation.
Loading...
or
Not Currently Available for Direct Purchase