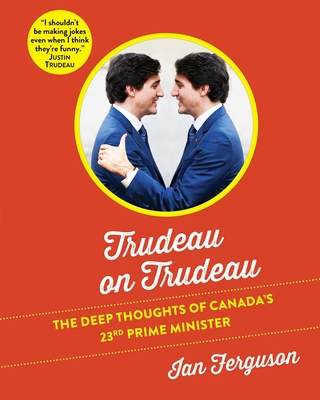 The bestselling satirical book that takes you on a hilarious journey through the mind of the part-time snowboarding instructor, drama teacher, and “costume” enthusiast who is the prime minister of Canada.

Trudeau on Trudeau is a book like no other. It’s a collection of real words spoken by Prime Minister Justin Trudeau that paints a portrait of a man who hasn’t quite gotten the hang of leading Canada. Included are familiar quotes, such as “The budget will balance itself”; the infamous “You are a piece of sh*t”; and the plain pathetic “We will grow the economy from the heart out”; and many, many more.

Full of real photos of Justin taking selfies, quizzes, a photo album of Justin’s taxpayer-funded vacation in India, and laugh-out-loud commentary, Trudeau on Trudeau is sure to answer the question, “What happens when a part-time snowboarder and drama teacher becomes prime minister of Canada?”

Trudeau on Trudeau is a must-have, not just for political junkies, but for any and all Canadians who care about the future of our country.

Ian Ferguson won the Stephen Leacock Award for Humour for his book Village of the Small Houses. He is the coauthor, with his brother Will Ferguson, of the runaway bestseller How to be a Canadian: Even If You Already Are One, which was shortlisted for the Stephen Leacock Award and won the CBA Libris Award for nonfiction. He currently resides on an exotic island in the Pacific Ocean…so, Victoria.

Praise For Trudeau on Trudeau: The Deep Thoughts of Canada's 23rd Prime Minister…

"It was a treat to nestle down for a giggle with How to be a Canadian. It made me glad that I already am one."

“Funny. You want funny, Canadian funny? We’re talking about the Brothers Ferguson—cleverly organized, How to be a Canadian rolls through a veritable Vegreville smorgasboard of national touchstones.”

“A decidedly broad notion of humour is required to enjoy the brothers’ efforts, but there are an awful lot of one-liners that will come in handy.”

Praise for The Village of the Small Houses: A Memoir of Sorts

"Ferguson’s memoir is an engaging romp, full of delightful, offbeat embellishments. Village of the Small Houses does what literature is supposed to do. It gives us characters we haven’t seen much of before and places we’ve never heard of and brings them both joyfully to life."
— Joel Yanofsky, The National Post

"The story is as much an affirmation of the sustaining power of imagination—as applied to storytelling and play and community interaction—as it is an indictment of the dispiriting outrage that is racism or poverty or conformity. The laughs, what’s more, are never far removed from sadness, pathos and social or domestic dysfunction."
— Charles Wilkins, The Globe and Mail

“Words of a born storyteller, a gift Ferguson apparently inherited from the old man—Ferguson writes lightly but movingly. He’s a deft hand with pacing and the dialogue rings true.”
— Andrew Vowles, The Hamilton Spectator

"Humour is a survival skill, and Ferguson has developed it to the point of art. You’ll laugh so hard while reading this book that you will temporarily be distracted from the bleakness between the lines."
— Margaret Gunning, The Edmonton Journal

"Humour is a survival skill, and Ferguson has developed it to the point of art. You’ll laugh so hard while reading this book that you will temporarily be distracted from the bleakness between the lines."
— Margaret Gunning, The Edmonton Journal
or support indie stores by buying on
Copyright © 2020 American Booksellers Association