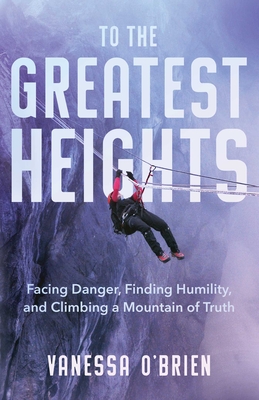 To the Greatest Heights

Facing Danger, Finding Humility, and Climbing a Mountain of Truth

This riveting and uplifting memoir by Vanessa O’Brien, record-breaking American-British explorer, takes you on an unexpected journey to the top of the world’s highest mountains.

Long before she became the first American woman to summit K2 and the first British woman to return from its summit alive, Vanessa O’Brien was a feisty suburban Detroit teenager forced to reinvent her world in the wake of a devastating loss that destroyed her family.

Making her own way in the world, Vanessa strove to reach her lofty ambitions. Soon, armed with an MBA and a wry sense of humor, she climbed the corporate ladder to great success, but after the 2009 economic meltdown, her career went into a tailspin. She searched for a new purpose and settled on an unlikely goal: climbing Mount Everest. When her first attempt ended in disaster, she trudged home, humbled but wiser. Two years later, she made it to the top of the world. And then she kept going.

Grounded by a cadre of wise-cracking friends and an inimitable British spouse, Vanessa held her own in the intensely competitive world of mountaineering, summiting the highest peak on every continent, and skiing the last degree to the North and South Poles. She set new speed records for the Seven Summits, receiving a Guinness World Record and the Explorers Grand Slam, and finally made peace with her traumatic past. During her attempt on K2, she very nearly gave up. But on the “savage mountain,” which kills one out of every four climbers who summit, Vanessa evolved from an adventurer out to challenge herself to an explorer with a high-altitude perspective on a changing world—and a new call to share her knowledge and passion across the globe.

Told with heart and humor, Vanessa’s journey from suburban Detroit to Everest’s Death Zone to the summit of K2 and beyond, is a transformative story of resilience, higher purpose, and the courage to overcome any obstacle.

Praise For To the Greatest Heights: Facing Danger, Finding Humility, and Climbing a Mountain of Truth…

"O'Brien pours her unflagging energy and hard-won life wisdom into every aspect of her book . . . A vicariously engaging addition to the literature on mountaineering as well as a beacon of inspiration in these dark times. O'Brien's warm, witty voice will bring a wide audience to her world-class adventures."
— Kirkus Reviews (starred review)

"Thrilling . . . O’Brien makes readers feel as if they’re on the mountain with her through her vivid descriptions and detail . . . Readers will devour O'Brien's sensational, electrifying tale."
— Publishers Weekly

"Readers will enjoy vicariously experiencing O'Brien's thrills and fears, and she does a fine job of sharing her joys and failures. This should be a high-point for armchair adventurers."
— Booklist

"What a wonderful, honest, refreshing book, full of free spirited adventure, humour and profound thoughts to provide inspiration to anyone who simply dreams of getting out and doing their own thing."
— Sir Chris Bonington, world famous mountaineer and internationally bestselling author of ASCENT

"Ernest Shackleton listed those qualities an explorer should possess over a century ago: Optimism, Patience, Idealism with Imagination, and Courage. Vanessa’s qualities are truly akin to these."
— Alexandra Shackleton, Sir Ernest Shackleton’s granddaughter

"A must-read for anyone interested in adventure and exploration. Vanessa’s memoir gives us insight into what drives her and how she approaches challenges, both in her personal life and on the world’s highest peaks."
— Jim Clash, Forbes adventure journalist

"Refreshing and delightfully written, To the Greatest Heights is a rare mix of heart-stopping adventure and powerful self-reflection by one of America's finest mountaineers."
— Johanna Garton, author of EDGE OF THE MAP

"TO THE GREATEST HEIGHTS is a brutally honest, beautifully crafted and truly inspirational account of an almost impossible journey completed thanks to the author’s unswerving commitment, determination and courage."
— Neil Laughton, Chairman of The Scientific Exploration Society

"An excellent exposition of the will and resolve of a woman to achieve the most challenging objectives and goals in life.  A saga of physical and psychological pain and determination.  A treat to read."
— Masood Aslam, (Ret) Lt-General Pakistan Army

"O’Brien’s story is deep in insight and observation. An impressive read."
— Peter Hillary, Chairman of the Himalayan Trust

Vanessa O’Brien is a British and American mountaineer, explorer, public speaker, and former business executive. As a result of her dual nationality, she became the first American and British woman to successfully summit K2 on July 28, 2017 when, on her third attempt, she successfully led a team of twelve members to the summit and back. In 2018, she received Explorer of the Year from the Scientific Exploration Society for her efforts. In 2022, Vanessa became the first woman to reach extremes on land, sea, and air, completing the Explorers’ Extreme Trifecta after passing the Kármán line on Blue Origin’s sixth human spaceflight, NS-22. She is a Fellow of the Royal Geographical Society and a member of the Scientific Exploration Society (SES).
Loading...
or support indie stores by buying on