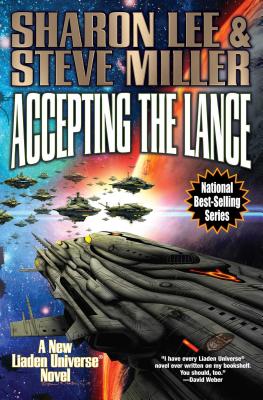 Exiled from Liad after bombing a city to save it from The Department of the Interior’s infernal weapons and plans, Clan Korval has gone to ground on the back water planet Surebleak, whose people are as untamed as its weather.

Far beyond the surface of frigid Surebleak, Korval’s far-flung trade network needs a serious reset. From flagship Dutiful Passage to the experimental self-aware Bechimo, the clan’s ships are prowling space lanes seeking trade. Meanwhile, old tech from a failed universe and the machinations of the mysterious Uncle are coalescing into dangerous opportunity or nefarious trap.

And the Department of the Interior is not done with Clan Korval yet. They seek a final fully reckoned revenge, with Surebleak and Korval’s ships and people everywhere in the crosshairs.

About Accepting the Lance:

"Accepting the Lance is a tour de force! So many threads woven, so many pieces moved on the board, old and new friends met, this book is an extraordinary installment in a brilliant series. I stayed up till 3 a.m. reading it and I have zero regrets. An incredible ride of a book!"—Nalini Singh

Praise for The Liaden Universe®:

"This series [is] . . . the premier place to find good romantic SF adventure. . . . strong characters finding their own way (and, often, each other) in an action-packed galaxy of worlds. . . . Every story stands on its own; readers don’t have to be familiar with the Liaden universe. Those who have had the pleasure, though, will find many connections to existing tales.” —Analog on A Liaden Constellation, Volume 1

"As always, this intelligent space opera focuses on matters of manners, honor, duty, and clever repartee; violence is rarely the solution, and subtlety wins out over overt force. . . . [Neogenesis] provides thoroughly satisfying progression or resolution for multiple threads and will feel comfortably familiar for fans of Korval’s escapades."—Publishers Weekly on Neogenesis

“Every now and then you come across an author, or in this case, a pair, who write exactly what you want to read, the characters and personalities that make you enjoy meeting them. . . . I rarely rave on and on about stories, but I am devoted to Lee and Miller novels and stories.”—Anne McCaffrey