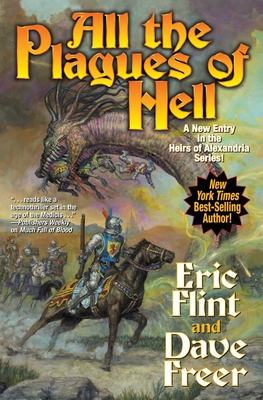 All the Plagues of Hell (Heirs of Alexandria #6) (Mass Market)

Orkise is loose. The snake-god of plague has been awakened by Lucia del Maino. With the venomous magic of Orkise at her command, Lucia plots to marry and then murder the usurper who now rules Milan, the condottiere Carlo Sforza—known to friend and foe alike as the Wolf of the North. On his side, Sforza has only the skill and cunning of his physician, Francisco Turner. But will that be enough to save the Wolf of the North? For out there in the countryside of northern Italy, in a Renaissance transformed by arcane magical knowledge, Orkise is uncoiling all the plagues of hell.

About All the Plagues of Hell:
“. . . a compelling tale of political, military, and magical conflict . . .”—Booklist

“. . . an old-style police-procedural mystery, set in 17th century Germany. . . . The threads . . . spin together . . . to weave an addictively entertaining story. . . . A strong addition to a fun series.”—The Galveston County Daily News

“. . . reads like a technothriller set in the age of the Medicis. . .”—Publishers Weekly

About A Mankind Witch, by Dave Freer:
“Good characterization, ripsnorting action and an ingenious plot make this a feast . . .”
—Publishers Weekly, starred review