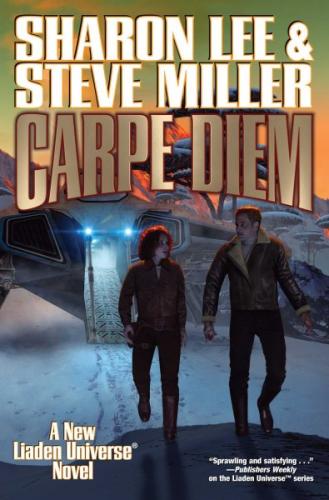 On the run from interplanetary assassins, covert operative Val Con yos'Phelium and former mercenary sergeant Miri Robertson have wound up stranded on a distant planet with no rescue in sight. Until they figure out a way back to Liad, these two lost souls must find a way to trust each another—and let their love heal the dark wounds of their past. . . .

Back on Liad, Shan yos'Galan, Val Con's cousin and foster brother, and his life-partner, Priscilla Mendoza, have initiated their own search for the missing member of Clan Korval. But what they don't know is that those who seek to destroy Val Con and Miri are just as determined to bring down Clan Korval. All the deadly enemy needs is someone to unwittingly lead them to their target. . . .

About Dragon in Exile:

“Compelling and wondrous, as sharp and graceful as Damascus steel, Necessity's Child is a terrific addition to Lee & Miller's addictive series.”—Patricia Briggs

About the Liaden Universe® series:

“Every now and then you come across an author, or in this case, a pair, who write exactly what you want to read, the characters and personalities that make you enjoy meeting them. . . . I rarely rave on and on about stories, but I am devoted to Lee and Miller novels and stories.”—Anne McCaffrey

“[D]elightful stories of adventure and romance set in a far future . . . space opera milieu. It’s all a rather heady mix of Gordon R. Dickson, the Forsythe Saga, and Victoria Holt, with Lee and Miller’s own unique touches making it all sparkle and sizzle. Anyone whose taste runs toward SF in the true romantic tradition can’t help but like the Liaden Universe.”—Analog

“[T]he many fans of the Liaden universe will welcome the latest . . . continuing young pilot Theo Waitley’s adventures.”—Booklist on Saltation