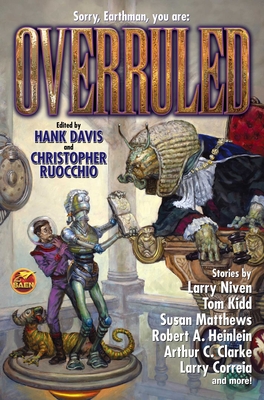 ORDER IN THE COURT! A new anthology of science fiction stories that explores what the future of jurisprudence might well be like, with thrilling, hilarious, and downright entertaining results! So much fun, it oughta be illegal! Stories by Robert A. Heinlein, Larry Correia, Clifford D. Simak, Sarah A. Hoyt, and more.

Whatever the future may hold, one thing is certain: whenever two people get together, the possibility for disagreement will always be present. And when there are conflicts that need settling, lawyers won’t be far behind. From ambulance chasers out to line their own pockets with the client’s money to champions of Justice and Law with a capital J and L, attorneys of all stripes will no doubt follow us to the stars and beyond. Here then, a collection of science fiction tales of men and women who try to balance the scales of justice on a cosmic scale.

An artist tries to disprove the old adage of a man who acts as his own attorney having a fool for a client when he finds himself accused of the heinous crime . . . of drawing portraits on an alien world in Tom Kidd’s “The Sketcher.” An attorney has the unenviable job of defending a computer program accused of murder in Tony Daniel’s “Checksum, Checkmate.” And in Larry Correia’s “Lawyer Fight,” the battle for justice becomes literal when Monster Hunter International is called in to clean up a law office overrun by zombies.

Plus, classics by Robert A. Heinlein, Larry Niven, Clifford D. Simak, Robert Silverberg, and more, and newer stories by Sarah A. Hoyt, Alex Shvartsman, and Alvaro Zinos-Amaro, and still other stellar talents bringing down the judge’s gavel with a verdict of excellent entertainment.

Praise for the contributors:

Robert A. Heinlein: “[Stories] as sleekly engineered as a starship.” –Publishers Weekly

Robert Silverberg: “. . . when Silverberg is at the top of his form, no one is better.” –George R. R. Martin

“. . . the 13 tales in this collection blend sf with horror to demonstrate the resiliency of both genres . . . offers strong tales by the genre’s best storytellers.” —Library Journal

“. . . spectacular space battles and alien contacts . . .  themes of military ethics, the uses of artificial intelligence, and the limits of the capacity of the human mind. . . . It is the human interactions and decisions that ultimately drive the stories. . . . Will appeal to fans of military and hard science fiction and any readers fascinated by the possibilities of space travel.”—Booklist

“. . . stories of giant spaceships at war, at peace, and in the often-gray areas between. . . . A worthy addition to a long tradition of ship-based fiction, and its authors portray captains, arcane astrogators, and civilian child passengers with equal depth. It’s recommended for fans of military SF and space adventure.”—Publishers Weekly

“. . . you’d probably expect some tight, action-filled space opera stories of giant space battles . . . and there’s some of that. But there are also espionage stories, rescue missions, political conflicts, alternate histories, even a few humorous tales. . . . Each author took the premise in a different direction . . . if I had to identify one common feature to all the stories, it would be that they’re all fun. . . . Like it says, big ships blowing things up. What’s not to like?”—Analog

Hank Davis is Senior Editor at Baen Books. He served in the Army in Vietnam and has had stories in Analog Science Fiction, The Magazine of Fantasy and Science Fiction, and anthologies If and Orbit.

Christopher lives in Raleigh, North Carolina with his wife, Jenna.
Loading...
or
Not Currently Available for Direct Purchase